For Sierra Battery, 5th Battalion, 11th Marine Regiment, the responsibility of tracking almost $6 million worth of ammunition rests in the hands of Lance Cpl. Ryan Chandrapaul.

Serving as the ammunition chief and armory chief, the 21-year-old St. Cloud, Fla., native, orders, tracks and secures everything from rockets to machine guns.

“Before I deployed, I did support for Mojave Viper and I learned more about ammo in those six months than most do in years,” Chandrapaul said. “So now, I know a lot about the weapons systems and the ammunition fired from them so I can better support any unit I’m with.”

Before Chandrapaul became a Marine, he had his sights set on becoming a healthcare administrator.

“I wanted to be part of healthcare administration, but something about it didn’t click with me,” Chandrapaul said, a 2009 graduate of Harmony High School. “I wanted a challenge and so I went for the biggest one I could find. I’ve always been naturally competitive even with the little things and the Marine Corps offered an actual challenge so I took it.”

No stranger to hard work, Chandrapaul has worked odd jobs since he was young, and has taken the same mentality of hard work to every job including the several he does now.

“I’ve been working since I was 12 from everything from my aunt’s clothing store, to web designer for a rental car company,” Chandrapaul said. “Each place I’ve worked at had a mentor who told me hard work pays off in the end. It still does, especially here.”

Staff Sgt. Samuel Avila, 2nd platoon sergeant, Sierra Battery, 5th Bn., 11th Marines, and Chandrapaul’s direct supervisor, has seen how a he has taken on the responsibility normally placed on a much senior Marine.

“Even though (Chandrapaul) is just a lance corporal, he is in charge of keeping track of all weapons and ammunition we have here,” Avila said, an El Paso, Texas, native. “It’s his skillset and work ethic that make him such an asset and the go-to guy for all things ammo.”

“The rounds and rockets he’s responsible for end up as artillery fire in our (area of operations) and I know that’s something he’s proud of,” Avila added.

Chandrapaul plans on making a career in the Marine Corps and has his sights set on a more challenging profession as a Marine.

“When I re-enlist I plan on being an explosive ordnance disposal technician,” Chandrapaul said. “I wanted to learn about ammo and explosives before I did so I became an ammunition technician first.”

“It’s cool that you mix your job with the thrill of doing it. If I can help save lives by doing my job, then it was all worth it,” Chandrapaul added. 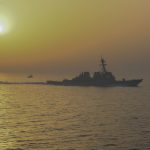