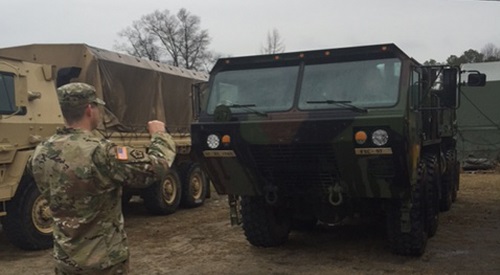 JANUARY 9, 2017, COLUMBIA, S.C., By Capt. Jessica Donnelly – As South Carolina National Guard units across the state prepare for the first drill of the new year, Vehicle Recovery Teams (VRT) are organizing in response to the first winter storm of 2017.

A VRT consists of a wrecker asset, two Humvees, and six to eight people, he added. The South Carolina National Guard prepositions liaisons in areas expected to be hit the hardest with severe weather then coordinates with the teams to respond with assistance as needed.

“We have troops on standby ready to respond if needed in support of the South Carolina Highway Patrol,” said Bostic.

The South Carolina National Guard was prepared to respond to the winter storm after recent training conducted with the highway patrol in November 2016. Soldiers with the 228th TTSB partnered with the civilian agency for Exercise Palmetto Lightning, where South Carolina National Guard liaisons staged at different locations to communicate to the VRTs. The liaisons relayed missions to the teams who would react based on a scenario, such as pulling a vehicle from a ditch or clearing a road to allow first responders access to ensure the safety of South Carolina citizens.

“We do this type of training every year so that we’re prepared to respond to winter weather,” added Bostic.