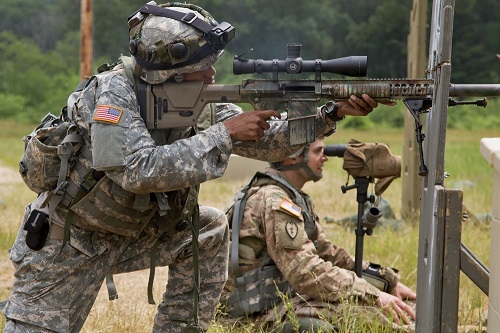 “The course is designed to get all of the snipers from the brigade together to train, broaden their horizons and share tactics, techniques, and procedures,” said Bastian. “Sharing knowledge in this manner is paramount to operational success and allows them to become masters of their craft.”

Bastian said that the course packs weeks of information and training into a 10-day period. He enlisted the help of two former instructors at the U.S. Army’s Sniper School in Fort Benning, Georgia to assist with the training: Mr. Tarrol Peterson, a U.S. Army Sniper Association instructor, and Staff
Sgt. John Brady, a sniper instructor at the 10th Mountain Division’s Light Fighter School at Fort Drum, New York.

“I had to call in a couple of favors because of the scope of this course,” said Bastian. “My two co-trainers bring a breadth of knowledge and experience that is unparalleled and gives these Soldiers an opportunity that they won’t get otherwise.”

Peterson said the training course is invaluable for the snipers who go through it.

“It’s immensely important to train and have courses like this,” said Peterson. “The Army has a multitude of systems and professionals to continually train everyone, except snipers. When these guys go back to their units, there’s not a lot of personnel that can train them properly. This course will help them continue their education and properly train themselves.”

Peterson said the course will teach the snipers from the 33rd Infantry Brigade Combat Team how to design and implement their own training, forecast ammunition, set up targets and ranges, and properly train in camouflage and stalking techniques.

Brady reiterated his colleagues’ opinion of the course.

“It’s a necessity to have a program like this,” said Brady. “It’s a force multiplier getting multiple sniper teams together to train and gain the knowledge they need for success. Over this 10-day period, they’ll realize how much work it will take them to learn how to conduct their own training, and we’ll give them the knowledge they need to do so.”

Brady said he’s never seen a program of this scope done before in the National Guard.

“On active duty we try to get different sniper teams together on the same range to share knowledge,” said Brady. “Other than in competitions, I haven’t seen this many snipers, active or Guard, on the same range.”

“This course gives our new snipers, the guys who haven’t been to school yet, an opportunity to learn from the best and will give them a head start when they do go to Fort Benning,” said Poplawski. “It also gives the team leaders and the sniper qualified guys much-needed practice and an opportunity to get ideas from an incredibly knowledgeable group of instructors.”

“This was an absolutely outstanding training course,” said Zatorski. “The snipers out here have gotten a lot of trigger time and time in the field to build our skills and collect data.”

Zatorski said that the training that he and his team received was invaluable.