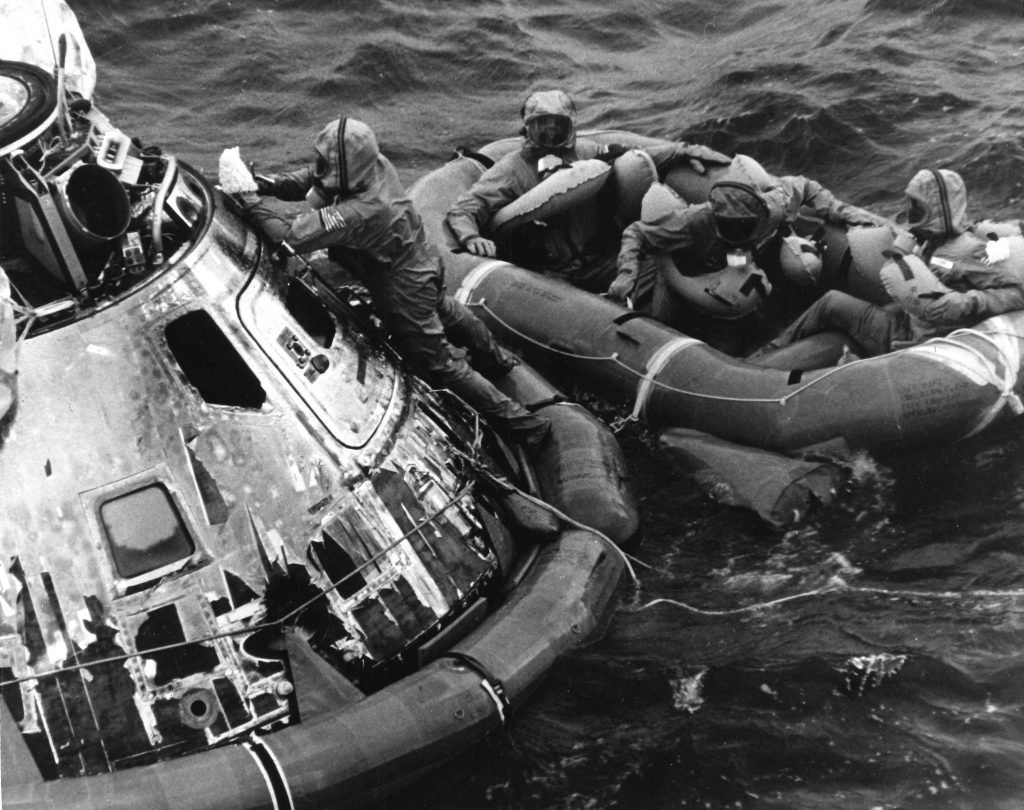 AUGUST 6, 2020 – It is no secret that Navy SEALs, the special operations force of the U.S. Navy, are constantly striving to out-perform themselves and each other, but how far can they go? In 1984, one of them went above and beyond his teammates and made history.

“At the time, NASA was taking astronaut candidates who were not just pilots,” said Capt. William Shepherd, retired SEAL, and the first commander of the International Space Station. “There were candidates made up of doctors, engineers and scientists, and I looked at that and said, ‘You know I’ve spent a lot of time in the water in my SCUBA gear, and that’s an awful lot like being in a space suit, so I think I’ll just apply and see what happens.’”

Not long after, Shepherd learned he would become a member of the NASA Astronaut Corps, making him not only the first military non-aviator, but also the first Navy SEAL to go through astronaut training in U.S. history.

“We are now at a crossroads, deciding whether we are bound to inhabit only the Earth, or if humans are to live and work far from the home planet,” said Shepherd in an interview regarding the 5th anniversary of continuous life aboard the International Space Station. “Let us continue now with new explorations which are more expansive and more bold; voyages which will define us as a space-faring civilization.”

Shepherd’s path to becoming an astronaut in service to the country started with Underwater Demolition Team ELEVEN, then SEAL Teams ONE and TWO, and Special Boat Unit TWENTY, all operating in the Pacific, Atlantic and European theaters.

Although Shepherd was standing in the ranks among the most highly trained warriors in the world, he looked towards the stars to achieve more, he wasn’t the only one. Capt. (SEAL) Chris Cassidy, a current astronaut, spent more than 10 years in the SEAL teams and was directly influenced by the previous achievements of Shepherd.

“In my experience with the SEAL teams and with going through BUD/S, it’s given me the confidence to know I can accomplish anything that I want,” said Cassidy in an interview with U.S. Navy SEAL & SWCC Page. “If you look at SEALs after their life in the teams, you’ll find people in all different sectors of industry doing all types of things. I personally always had an interest in astronauts, and I followed Capt. Shepherd’s career and was inspired by him to be an astronaut.”

Currently, Cassidy is in command of the International Space Station on ‘Expedition 63.’ The current mission he leads is conducting research investigations focused on biology, earth science, human research, physical sciences and technology development, as well as providing the foundation for continuing human spaceflight beyond low-earth orbit to the Moon and Mars which is central to future space exploration as part of NASA’s Artemis program.

The Artemis program is an ongoing U.S. government-funded crewed spaceflight program with the goal of landing “the first woman and the next man” on the Moon by 2024, and it is likely that a U.S. astronaut currently serving in the program will be the next American to step on the surface of the Moon.

It is possible that astronaut could be Lt. (SEAL) Jonny Kim.

In 2002, Kim decided to leave his hometown of Santa Monica, Calif. to enlist in the Navy and join the ranks of Naval Special Warfare operators.

“I didn’t like the person I was growing up to become. I needed to find myself and my identity,” said Kim in an interview with former SEAL, Jocko Willink. “And for me, getting out of my comfort zone, getting away from the people I grew up with, and finding adventure, that was my odyssey, and it was the best decision I ever made.”

His experiences as a medic taught him about teamwork, humility and service. Upon returning home, he decided to challenge himself yet again and applied for a commissioning program that put him on the path to become a medical doctor. Kim’s application was accepted and he began his residency to Harvard Medical School, Boston, Mass.

In 2017, Kim was a resident physician in emergency medicine with Partners Healthcare at Massachusetts General Hospital, and Brigham and Women’s Hospital in Boston. He finally met his goal of becoming a doctor, but he didn’t stop there. That same year, he applied to become an astronaut and was accepted, joining NASA’s team on the Artemis program.

“I was told that with the right attitude, and with enough hard work, if you get up after every time you fail, you can amount to something and you can do positive work. You can leave a positive mark for our world, and that’s what I aim to do,” said Kim.

Kim’s unwavering perseverance led him to be the outstanding American that many call a hero, and he encourages many others to follow in his path of greatness as well.

“Don’t let that hunger for the unknown go away,” said Kim. “That curiosity is so important, so you should maintain that passion for what you do. Never in a million years would I have thought I could have been an astronaut candidate. I didn’t have the confidence from my childhood, but dreams are possible and all good things in life are hard to get, so persevere and don’t give up!”