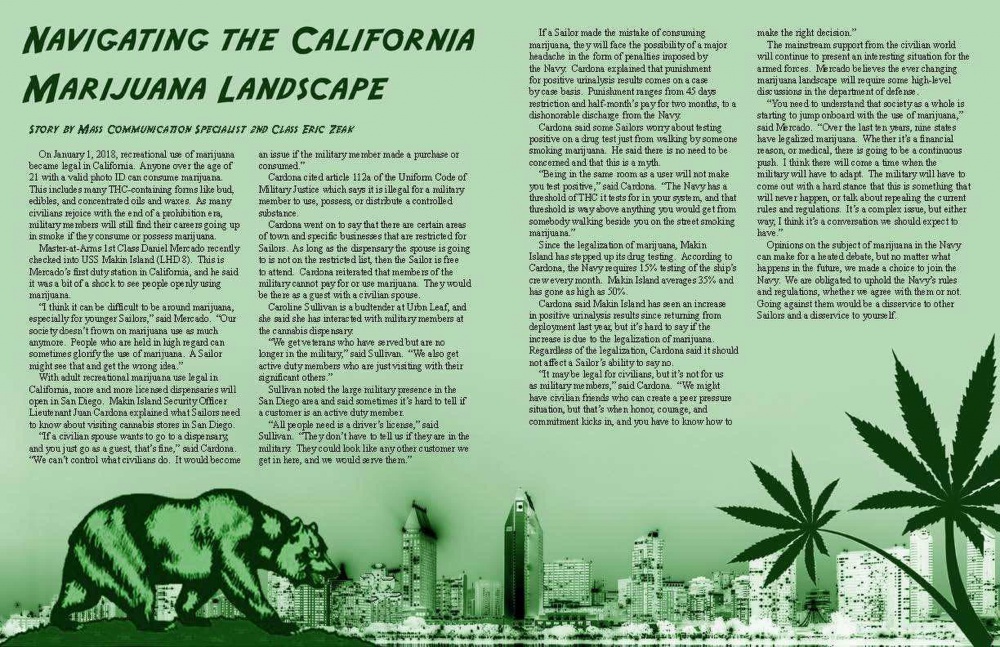 APRIL 20, 2019 – Pot, weed, grass, dope, herb, ganja, devil’s lettuce, or marijuana, no matter what you call it, on January 1, 2018, recreational use of cannabis became legal in California. Anyone over the age of 21 with a valid photo ID can consume cannabis. This includes many THC-containing forms like bud, edibles, and concentrated oils and waxes. As many civilians rejoice with the end of a prohibition era, military members will still find their careers going up in smoke if they use or possess marijuana.

Ship’s Serviceman Seaman Quiree Williams moved to California five years ago for his first duty station aboard USS Makin Island (LHD 8). Williams said it was a bit of a shock to see people openly using the drug, especially before legalization.

“I think it’s hard to go anywhere in San Diego and not be exposed to marijuana,” said Williams. “You can smell it at the beach and you hear ads about dispensaries. Your friends and family might even be consumers because it’s legal for civilians.”

Williams is in an interesting situation and said he is exposed to cannabis frequently because his wife is a user. They’ve created house rules like opening windows or going outside if she is going to smoke, just as a precaution.

“I don’t have a problem with my wife smoking,” said Williams. “You’re going to be exposed to it just by living in a state where cannabis is legal. It’s always in the back of my mind though that I’m in the Navy and can’t use it.”

Williams isn’t alone in feeling surrounded by cannabis users. Master-at-Arms 1st Class Daniel Mercado echoed that sentiment and said he thinks it could be an issue for those in the military.

“I think it can be difficult to be around marijuana, especially for younger Sailors,” said Mercado. “Our society doesn’t frown on marijuana use as much anymore. People who are held in high regard can sometimes glorify the use of marijuana. A Sailor might see that and get the wrong idea.”

As the cannabis industry in California continues to grow, tax revenue is a topic that’s often brought up by state legislators. Current tax rates include a statewide excise tax of 15% and cultivation taxes of $9.25 per ounce of flower and $2.75 per ounce of leaves. Many cities have also adopted a local tax on cannabis, including San Diego which taxes all sales of recreational cannabis at an additional 5%. Consumers also pay sales tax on any purchase of cannabis.

“If a civilian spouse wants to go to a dispensary, and you just go as a guest, that’s fine,” said Cardona. “We can’t control what civilians do. It would become an issue if the military member made a purchase or consumed.”

Cardona cited article 112a of the Uniform Code of Military Justice which says it is illegal for a military member to use, possess, or distribute a controlled substance.

According to Cardona, certain areas of town and specific businesses are restricted for Sailors. As long as the dispensary the spouse is going to is not on the restricted list, then the Sailor is free to attend. Members of the military cannot pay for or use marijuana. They would be there as a guest with a civilian spouse.

Urbn Leaf is one of many dispensaries in San Diego. A trip to one of their locations quickly indicates that business is booming. Long lines of customers form outside the building, especially if the bus shuttling tourists from the Ocean and Pacific Beach areas has just pulled in. Patrons are first greeted by a large security guard who wands them down before allowing access to the building. Once inside, there’s another line of customers. Many of them are buzzing with anticipation as they wait to have their ID checked. After the Urbn Leaf employees input customer information into a computer system, another security guard opens the door to the main selling are. Urbn Leaf prides itself on being a high-end cannabis boutique. Gone are the days of shady drug deals taking place in dark alleys. The Urbn Leaf selling are is classy. It’s clean. Glass cases shine gull of product waiting to be purchased. The salespeople, called budtenders, eagerly wait to share their knowledge about the industry and the products they sell.

Budtender Caroline Sullivan said she has interacted with military members at the cannabis dispensary.

“We get veterans who have served but are no longer in the military,” said Sullivan. “We also get active duty members who are just visiting with their significant others.”

Sullivan noted the large military presence in the San Diego area and said sometimes it’s hard to tell if a customer is an active duty member.

“All people need is a driver’s license,” said Sullivan. “They don’t have to tell us if they are in the military. They could look like any other customer we get in here, and we would serve them.”

If a Sailor consumes marijuana, they can face a major headache in the form of penalties imposed by the Navy. Cardona explained that punishment for positive urinalysis results comes on a case by case basis.

Cardona said some Sailors worry about testing positive on a drug test just from walking by someone smoking marijuana. He said there is no need to be concerned and that this is a myth.

“Being in the same room as a user will not make you test positive,” said Cardona. “The Navy has a threshold of THC it tests for in your system, and that threshold is way above anything you would get from somebody walking beside you on the street smoking marijuana.”

Since the legalization of marijuana, Makin Island has stepped up its drug testing. According to Cardona, the Navy requires 15% testing of the ship’s crew every month. Makin Island averages 35% and has gone as high as 50%.

Cardona said Makin Island has seen an increase in positive urinalysis results since returning from deployment last year, but it’s hard to say if the increase is due to the legalization of marijuana. Regardless of the legalization, Cardona said it should not affect a Sailor’s ability to say no.

“It may be legal for civilians, but it’s not for us as military members,” said Cardona. “We might have civilian friends who can create a peer pressure situation, but that’s when honor, courage, and commitment kicks in, and you have to know how to make the right decision.”

The mainstream support from the civilian world will continue to present an interesting situation for the armed forces. Mercado believes the ever changing marijuana landscape will require some high-level discussions in the Department of Defense.

“You need to understand that society as a whole is starting to jump onboard with the use of marijuana,” said Mercado. “Over the last ten years, nine states have legalized marijuana. Whether it’s a financial reason, or medical, there is going to be a continuous push. I think there will come a time when the military will have to adapt. The military will have to come out with a hard stance that this is something that will never happen, or talk about repealing the current rules and regulations. It’s a complex issue, but either way, I think it’s a conversation we should expect to have.”