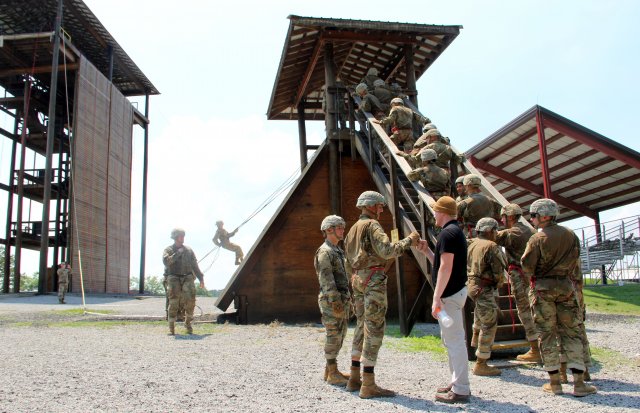 JULY 15, 2019 – Performance psychologists have long been a staple in the rosters of professional sports teams, and now the military is treating its future leaders like elite athletes.

Although a limited number of experts have previously worked with cadets, this year’s contingent is the largest ever, with 55 Master Resilience Trainers-Performance Experts from installations across the Army, descending on Fort Knox and embedding with CST Advanced Camp units at the company level.

CST is the culminating military training event for thousands of Reserve Officers’ Training Corps cadets across the country. Cadets who are college juniors and seniors must attend and pass the CST Advanced Camp in order to be commissioned into the Army.

“Regardless of how much we modernize, or new technology we bring into the Army, it is always going to come down to the human dimension and the performance of our individual Soldiers,” said Brig. Gen. Antonio Munera, Deputy Commanding General for U.S. Army Cadet Command.

Employment of sports psychology has a precedent in the military, but has traditionally been used for special operations forces. However, since 2008 the Army has stood up 29 R2 Performance Centers across installations Army-wide, including two opening this year in Vincenza, Italy and Camp Zama, Japan.

The R2 Centers are staffed with the MRT-PEs, who hold degrees in psychology, counseling, or kinesiology, with an emphasis in sport or performance psychology. The centers teach performance enhancement and mental resilience to Soldiers, families, Army civilians and individual units who request training.

The move is part of the Army’s overall strategy to enhance the personal readiness and lethality of its troops, taking a holistic approach that includes a focus not just on the physical component, but also on mental performance and resilience skills.

This year, the CST Advanced Camp increased from 31 days to 37 days, a move based on the push by Gen. Stephen J. Townsend, commander of the U.S. Army Training and Doctrine Command, to give Army Officers more experience with basic Soldier tasks, including additional time with basic rifle marksmanship (BRM), buddy-team live fire, and hand grenade training.

During BRM qualification, a must-pass event for cadets at Advanced Camp, Joe Rodriguez, an MRT-PE from the Fort Stewart, Ga., R2 Performance Center currently embedded with B Company, 7th Regiment at CST, focused on touching base with the cadets who were struggling to qualify.

Rodriguez, who has a degree in Applied Physiology and Kinesiology-Human Performance, worked on creating mental imagery scripts, often used by Olympic athletes, to reinforce the four fundamentals of marksmanship.

“When we use a mental imagery script, we are talking about doing a mental rehearsal of the event that is going to happen,” Rodriguez said. “Mental imagery is going to activate the same neural pathways within the brain as if the cadets were physically doing it… this is a science-based (technique) that can give you an edge,” he said.

According to Nicole Foster, Cal Poly San Luis Obispo ROTC cadet, attributes the technique with helping her on the rifle range. She initially shot a seven out of 40, well below the 23 out of 40 required to qualify on her rifle.

“One of the things we really discussed and I used today was mental imagery, and imagining myself in vivid detail going through the steps,” Foster said. “I literally sat there and was like ‘OK, I’m going to walk over (to the fox hole), I was hearing the crunch of the rocks underneath my feet, and I’m going to put my weapon down, remember to put the weapon butt down first…put my magazines on my left, and I’m gonna get down in the prone, I’m gonna look down (range) at my targets, and make sure I can see all the six targets, and keep my breathing steady.'”

Foster was able to qualify, shooting 27 out of 40 on her third try.

Beyond mental imagery, the MRT-PEs also teach techniques such as deliberate breathing, learning from failure, emotional priming/energy management, “controlling the ‘controllables’,” and fostering a growth mindset, to cadets as they go through the challenges and obstacles of Advanced Camp.

Major Robert Parker, 7th Regiment cadre member, said he wished he had had the training program cadets are getting now, to include the increased focus on infantry skills as well as the training provided by all the enablers, like the MRT-PEs, when he went through Advanced Camp years ago.

“My leadership would have developed exponentially quicker in the Army,” Parker said. “We’re setting them up for (success as) future leaders.”

Part of the benefit of exposing cadets to performance enhancement techniques before they commission as officers is that they will become familiar with the mental skills required for success in the military, inculcating that mindset into the Army culture, said Munera.

“You are educating them at a very early age, young leaders, on what it takes to be in the Army and how to take care of themselves and their Soldiers mentally, spiritually and physically,” Munera said.

“It’s another great resource that we can provide our Soldiers.”