The presentation allowed fans to get an up-close look at two Ospreys’ abilities to transform from helicopter to airplane mode.

“It’s a two-in-one aircraft,” said Capt. Daniel Kaiser, an MV-22B Osprey pilot and a Vista, Calif., native. “We want to expose the public to what is in the Marine Corps’ aviation inventory. Most people have a general idea of what the aircraft can do, but they’ve never seen it in person.”

During the demonstration, pilots showcased the Osprey’s ability to perform vertical and rolling takeoffs, high-speed passes at a maximum airspeed of 320 miles per hour and transitions from helicopter to airplane mode in midair.

The ultimate mission of the Osprey is to support the Marine Air Ground Task Force by providing assault support transport of combat troops, equipment and essential supplies.

The Osprey’s performance wowed thousands who attended the air show.

“The demonstration was pretty exciting,” said Eric Garcia, an air show spectator and a Temecula, Calif., native. “It shows the versatility of the aircraft. It’s like a Transformer.” 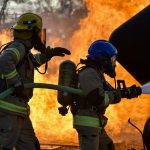