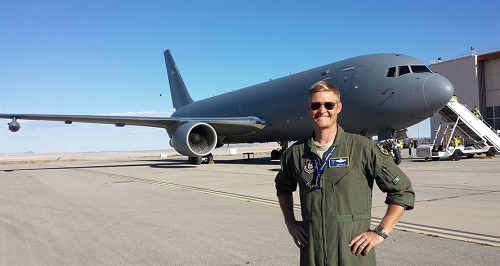 MARCH 28, 2016, EDWARDS AIR FORCE BASE, Calif. (AFNS) – As the Air Force gets ready for the arrival of its newest aerial refueling and strategic military transport aircraft, a diverse group of Airmen is working hard to make sure the KC-46A Pegasus is ready to meet the service’s needs. Lt. Col. John Mikal is one of them.

Mikal, a reservist KC-135 Stratotanker instructor pilot assigned to the 370th Flight Test Squadron, is also a KC-46 test pilot and member of the team that’s putting the Pegasus through a series of critical pre-production tests.

The Boeing Company developed the KC-46 from its 767 jet airliner and is scheduled to deliver 179 of the aircraft to the Air Force by 2028. The first 18 combat-ready tankers are scheduled to be delivered by August 2017.

To meet that timeline, Boeing is working closely with the Air Force to put the KC-46 through its paces. The company’s first test aircraft, a Boeing 767-2C, touched down at Edwards Air Force Base for the first time Oct. 15 for several days of fuel onload fatigue testing. During these tests, the KC-46 flew in close formations with a KC-135 and KC-10 Extender to see how the aircraft performed in different aerial refueling positions. While no fuel was passed, Boeing engineers were able to test the stress and strain on the Pegasus.

Mikal flew as the aircraft commander of the KC-135 during the first aerial refueling maneuvers of a KC-46 behind a KC-135 and in close formation with both the KC-10 and KC-46 on Oct. 19. Two days later, he flew as a pilot aboard the KC-46 during an aerial refueling receiver onload fatigue test behind a KC-10. He was the first Air Force reservist to fly the 767-2C, the commercial test variant of the KC-46.

“It was a tremendous honor to participate in and conduct KC-46 testing with the test team,” Mikal said. “The KC-46 will be an amazing operational aircraft, and I’m humbled to have the opportunity to be a part of this amazingly talented test team.”

Mikal isn’t the only Air Force reservist from the 370th FLTS qualified to take part in the KC-46 testing. The 370th has two KC-46 initial cadre boom operators — Master Sgts. Aaron Ray and Scott Scurlock — who will be taking part in Pegasus refueling testing in the coming months.

Since some 370th FLTS pilots are test pilots and some of its boom operators are flight test boom operators, they augment the KC-135, KC-10 and KC-46 flight test and aerial refueling flight test for Air Force Test Center programs.
On Jan. 24, the KC-46 successfully completed its first in-flight refueling demonstration as it passed 1,600 pounds of fuel to an F-16C Fighting Falcon.

“These are exciting times for the KC-46A program,” Col. Chris Coombs, the KC-46 system program manager at the Air Force Life Cycle Management Center at Wright-Patterson AFB, Ohio, said after that flight. “We have had plans on paper and data from simulation labs, but this in-flight demonstration shows we are truly making progress on bringing this capability of the next-generation of tankers to the warfighter supporting our global missions for years to come.”

After the refueling test with the F-16, the KC-46A had a robust in-flight refueling demonstration schedule for the next few weeks. The test with the fighter jet fulfilled the requirement to connect to a light/fast receiver aircraft. The remaining tests with the boom were scheduled to use an A-10 Thunderbolt II as the light/slow receiver and a C-17 Globemaster III as the heavy receiver.

Mikal said the KC-46 test aircraft will be spending a lot of time at Edwards AFB in the coming months as it goes through aerial refueling certification testing with a host of Air Force and coalition aircraft.

“There are about 18 different aircraft that need to be tested as they take on fuel from the KC-46,” he said. “A lot of that testing will take place here at Edwards, and I am ready to help out with that testing however I can.”

The KC-46A Pegasus is intended to replace the Air Force’s aging tanker fleet, which has been refueling aircraft for more than 50 years. With more refueling capacity and enhanced capabilities, improved efficiency, and increased capabilities for cargo and aeromedical evacuation, the KC-46A will provide aerial refueling support to the Air Force, Navy and Marine Corps, as well as allied nation coalition force aircraft.

“It is absolutely critical that we replace our aging tanker fleet with the KC-46A Pegasus aerial tanker,” said Air Force Secretary Deborah Lee James. “I am pleased to announce Seymour Johnson AFB as the first Reserve-led location because it is a testament to the Air Force’s commitment to the total force.

“We must use all three components — active, Guard and Reserve — operating cohesively and seamlessly as one team so we can realize the full potential of airpower.”

James also explained the KC-46A program is just the first phase of a three-phase effort to replace the aging tanker fleet. The first phase of tanker recapitalization will complete with final deliveries in fiscal year 2028.