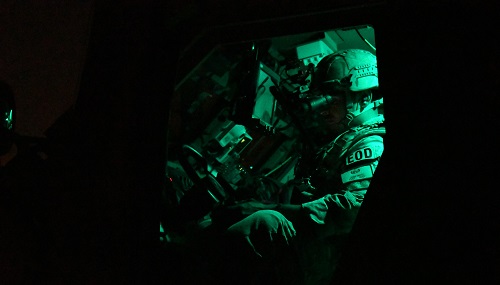 MARCH 28, 2017, AL UDEID AIR BASE, QATAR (AFNS) – Most of the crew is asleep, but for a few members. Outside, the sun is peaking over the horizon, sending long shadows across the terrain and buildings. Suddenly a loud banging from the door echoes through the hallway, breaking the silence and waking up the crew. The banging continues, and an Airman opens the door to discover a panic-stricken Airman holding onto her uniform blouse, wires protruding from various pockets and a loud ticking noise coming from her back. Immediately the Airman who opened the door recognizes the threat: a hostage outfitted with a bomb vest. This is one scenario that members of the 379th Expeditionary Civil Engineer Squadron Explosive Ordnance Disposal Flight faced during exercise “Vigilant Walrus,” a four-day exercise that consisted of various scenarios that tested EOD members’ skill, knowledge and endurance.

The training was conducted to help provide EOD technicians with the threat analysis and critical thinking skills required in order to safely and effectively handle any threats they may face, particularly if they forward deploy. Aside from the mental training aspect, the exercise also forced Airmen to operate and work with limited resources and limited rest, mirroring situations experienced in a forward-deployed environment.

“The exercises that we throw at our teams are derived from intelligence reports from EOD teams in the field,” said Capt. Daniel Blomberg, the 379th ECES EOD Flight commander. “They are compounded problems that we have to combat with limited personnel and limited resources.”

The EOD technicians were forced to work out of mine resistant ambush protected all-terrain vehicles and use limited gear, with little support from other agencies during the exercise. During night operations, crews were not allowed to use white light, making the scenarios more challenging and realistic.

“The scenarios involved a breach in the perimeter, and when that happens and you have white light, you become a target,” Blomberg said. “Not using white light forces the team to learn to operate using night vision goggles and in vehicles that are equipped to help them see at night, and makes a scenario completely different than during the day.”

Blomberg explained that NVG’s and the cameras on robots and M-ATV’s drastically altered depth perception and peripheral views, as well as provided very limited lines of sight. Because of these complications, a simple scenario during the day becomes increasingly complex at night.

“These are perishable skills,” said Blomberg. “If you don’t practice operating at night, you’re going to be in for a bad time.”

Aside from utilizing various tools, equipment and vehicles to complete their training, EOD technicians were able to practice using live explosives thanks to a brand new EOD range, which saw its first use on Feb. 10, 2017.

During Vigilant Walrus, EOD technicians utilized the new range as a staging point for scenarios, as well as a location for disposing munitions and explosives.

“The range allows us to train with almost all of our explosives and explosive tools in a safe and controlled environment,” said Staff Sgt. Daniel Metts, an EOD technician with the 379th ECES. “The range allows us to continue to strengthen our technical skills by utilizing our demolition explosives, and also acts as an emergency disposal location in the event of any improvised explosive ordnance or damaged munitions identified by munitions personnel.”

EOD personnel were able to accomplish a variety of training during the exercise, ranging from night vision operations to dealing with airfield bombings. Over the four days, the technicians were constantly on their toes and never knew when the next call would occur, but their endurance and perseverance paid off in the end.

“The exercise gave the (EOD technicians) the training, knowledge and experience that, if a call occurred along the lines of what they saw, would allow them to respond much faster,” said Blomberg. “We would be ready to go and react in probably a quarter of the time that would have taken prior to the exercise.”