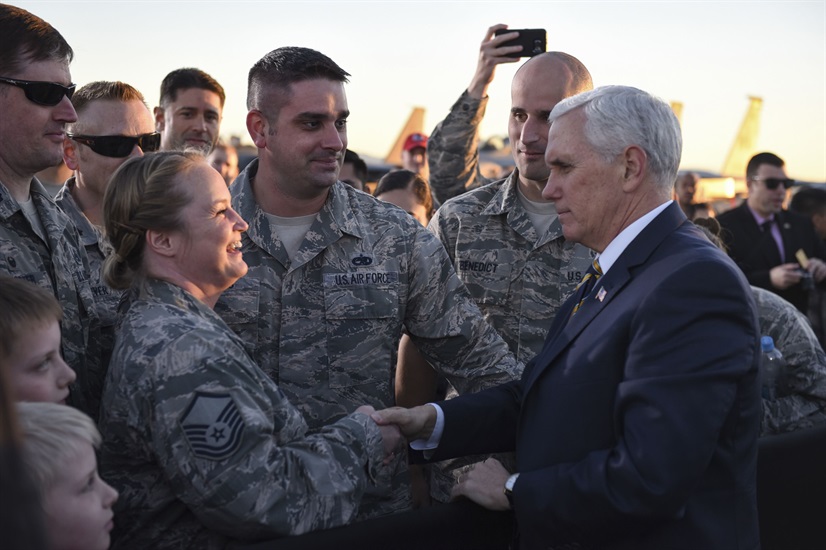 “The armed forces of the United States of America are the world’s greatest force for good,” the vice president told the airmen. “You chose to be a part of that force to follow in the contrails of our nation’s greatest heroes. You chose to do your part, at this time, to leave a legacy of freedom for generations yet to come. And while you come from the rest of us, you are the best of us.”

Nearly all airmen will come to Nellis for training at some point in their Air Force careers. “As we speak, this base is hosting the weapons and tactics conference where our warfighters tackle some of the most pressing problems facing our national security,” Pence said. “This base is laser focused on testing, tactics and training.”

The training, studies and experimentation conducted at Nellis helps to keep the U.S. military “on the cutting edge both strategy and strength,” the vice president said.

Dangerous World
“The truth is the world is more dangerous today than at any point since the fall of communism a quarter century ago,” he said. “Rogue regimes seek to threaten our people and endanger our allies. The menace of radical Islamic terrorism continues to rear its ugly head, and adversaries new and old have risen to challenge American leadership on the world stage.”

In these dangerous times, the country counts on its service members more than ever, Pence said.

The vice president noted that the continuing resolution currently in force runs out Jan. 19 and he called on Congress to pass the fiscal 2018 budget that will fund the government — including the military — past that date. The new budget would also allow DoD to push past the caps emplaced by the Budget Control Act of 2011, also known as sequestration.

“The budget sequester placed a tremendous burden on our military for the past five years,” Pence said. “It forced deep cuts in our defense budget and prevented the investments in innovation that we need to expand American strength.”