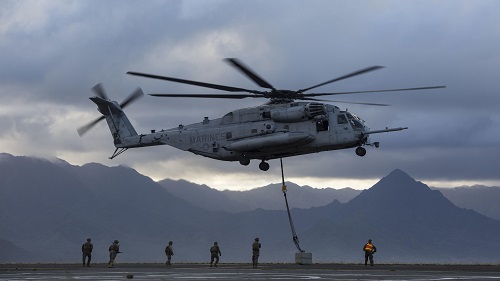 Sgt. Timothy Skelf, an airframe mechanic with HMH-463, was a crew member on one of the helicopters. He said external lift training couldn’t be done without the help from landing support specialists.

“During this drill we partnered with Transportation Services Company, we kept in constant communication with landing support specialists on the ground, so as to properly secure the cargo; sharing the training experience,” said Skelf.

This type of training is necessary for pilots and crew chiefs because when they are deployed, transporting vital cargo over long distances requires sustaining and flying time.

“We conducted our external loads, utilizing a cement block and an old Humvee,” Skelf said. “I helped guide the pilots to get the proper position for both the dual and single loads in the air.”

Lance Cpl. Dylan Tall, a landing support specialist with TSC, was observing for safety hazards during the training. He stated that this was not his first time preparing cargo for helicopters and he aided his helped the Marines who didn’t have experience with this training yet.

“For a lot of the less experienced Marines, they will learn that they are vital for the mission,” Tall said. “We are the only ones allowed to load and unload cargo, which we do with [speed and intensity].”

Tall said working alongside HMH-463 and other units on base is always a great experience for training and improves upon the goal for efficient transportation.

Staff Sgt. Derik Winningham, the landing support chief with TSC, said this training was a great illustration of the capabilities they can do, from helicopters to ships, the role of a landing support specialist has been proven time and time again.

“Our role as a landing support specialist is crucial, say for example a howitzer, ammo or food needs to be transported to a forward operating base, we are the only ones qualified to help move it,” Winningham said. “Since World War II, we have been moving supplies to the frontlines. I always tell my Marines, we are the first ones in and the last ones out.”