“This is a super aircraft. Within just three months of arriving for its first-ever deployment, it’s already a huge leap forward in capability for the Pacific Fleet,” said Harris. “The software upgrades that were put in place last fall have paid off in providing an immediate and effective advantage in ASW, ISR and sensor integration. In my opinion, the P-8A is exceeding its key performance parameters by a wide margin. This is exactly what we need to fight tonight. Send more my way!”

Led by VP-16 Commanding Officer, Cmdr. William C. Pennington Jr., the aircrew demonstrated why the P-8A is critical to the Navy’s rebalance to the Pacific.

“Admiral Harris’ visit highlights the significance of the P-8A’s role in the rebalance to the Pacific. The War Eagles were proud to showcase not only the capability of this leading-edge aircraft, but more so the enthusiasm of our aircrew and maintenance professionals in helping to set the foundation for how the maritime patrol and reconnaissance force will operate going forward in this strategic region,” said Pennington.

The P-8A brings the latest avionics and onboard systems to the maritime patrol and ISR mission making it the most advanced anti-submarine and anti-surface warfare aircraft in the world. The P-8A features a technologically agile open architecture that enables the integration of modern and capable sensors, a robust communications suite, anti-submarine and anti-surface warfare weapons and acoustic/non-acoustic sensors.

“It was a great honor having Adm. Harris visit our squadron. Our Sailors have been working extremely hard the last two months, answering the demands of a high operational tempo,” said Lt. Cmdr. Matthew Griffin, P-8A tactical coordinator. “They have truly embodied the VP-16 motto, ‘Anytime, Anywhere, Anytask…Nothing But Excellence!'”

In terms of mission effectiveness and reliability, the P-8A represents a leap forward for the United States’ maritime patrol and reconnaissance community.

The P-8A is a long-range aircraft capable of broad-area, maritime and littoral anti-submarine and anti-surface warfare, and ISR operations. The aircraft is a militarized Boeing Next-Generation 737 derivative. The aircraft has a maximum speed of 490 knots, a ceiling of 41,000 feet, and provides a range of more than 1,200 nautical miles with four hours on station. The P-8A is capable of delivering a number of weapons, including MK-54 torpedoes and Harpoon missiles. The multipurpose P-8A offers the joint, combined or naval operational commander a potent weapons platform with a rapid response time for worldwide employment. 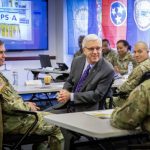 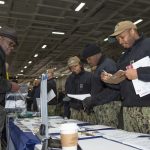