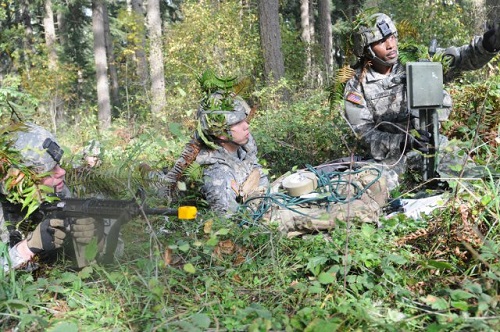 ARLINGTON, Va. (Army News Service, April 6, 2016) – A seismic shift has occurred recently in cyber for Soldiers and operators at the corps level and below, said Brig. Gen. Patricia A. Frost. It’s known as cyber electromagnetic activities, or CEMA.

She emphasized that CEMA capabilities are both for protection of the homeland as well as assets to be used by combatant commanders, so this capability must be expeditionary.

CEMA aims to exploit an advantage over enemies in both cyberspace and the electromagnetic spectrum, while simultaneously “denying them use of the same and protecting the mission command system.”

Broken into its elements, CEMA consists of the synchronization of cyberspace operations, electronic warfare, spectrum management operations, per FM 3-38. The FM notes in the introduction that this “is the first doctrinal manual of its kind.”

CEMA is a tool that’s critical to operations, and as such, the commander is the central figure in the conduct of CEMA, she said.

The shift to the integration of capabilities within CEMA occurred, Frost said, because in just the last five years, “the information environment has changed drastically [and], the threat has changed how we have to look at how we train our forces.”

That threat, she explained, has to do with CEMA-like capabilities being built by peer or near-peer adversaries that threaten troops, should they deploy in harm’s way.

To “scope the problem,” meaning getting one’s hands around the extent of the threat, “we’ve created an expeditionary cyber pilot,” Frost said, that involves a partnership with U.S. Training and Doctrine Command, U.S. Army Forces Command, and the combat training centers.

Elements of the cyber mission force were involved in a National Training Center rotation at Fort Irwin, California, recently, she said. Also, about 18 months ago, another CEMA-type pilot was done at the Joint Readiness Training Center, Fort Polk, Louisiana.

This July, there will be yet another exercise where “we’ll actually bring in electronic warfare so we will scope what that means in terms of capabilities and requirements for corps and below,” she said.

Besides scoping the problem, these exercises will also inform requirements for software and hardware needed, she said, adding it’s an exciting time to be an operator.

Frost then offered an example of a squad of Soldiers on patrol.

A patrol leaves its forward operating base with incredible intelligence, surveillance and reconnaissance capabilities. They can literally “see themselves and the environment they’re operating in,” she said.

“But then, there’s also a logical environment operating alongside that patrol that is feeding the enemy, position, navigation, timing, targeting information that fits in the cyberspace domain that I believe — and this is my personal opinion — that a brigade commander needs to be able to [better] see that battlespace,” she said.

Cyber mission force capability hasn’t yet been built down to that level yet, but that’s where she said she thinks it needs to be because it’s that important.

“The information environment is exploding every day,” Frost concluded. “Soldiers need to know how to navigate through that environment.”