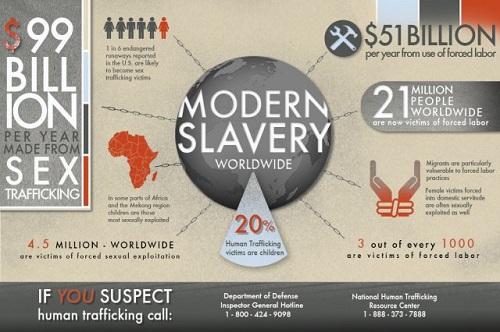 FORT BLISS, Texas (April 5, 2016) – Would you recognize the signs of human trafficking if they were in front of you? Service members and civilians in the operational contract support field are on the front lines combating trafficking in persons every day and must be able to detect this sometimes subtle form of modern day slavery.

Human trafficking is the use of force, fraud or coercion for the purpose of subjection to involuntary servitude, peonage, debt bondage or slavery. An estimated 20.9 million people are victimized worldwide, according to the Department of Defense’s Strategic Plan for Combating Trafficking in Persons.

Frank Kendall, the undersecretary of defense for acquisition, technology and logistics, spoke about the DOD’s focus on fighting human trafficking in 2016’s annual meeting of the President’s Interagency Task Force to Monitor and Combat Trafficking in Persons.

“The Department is totally committed to combating trafficking, and the place in which we encounter it most frequently is through overseas contracting,” Kendall said. “It’s often labor-related contracting, but many cases involve prostitution as well.”

Col. Joshua Burris, deputy chief of staff for Mission and Installation Contracting Command at Joint Base San Antonio-Sam Houston, Texas, and the executive director for DOD’s OCSJX-16, spoke about why combating trafficking in persons, CTIP, is incorporated into the exercise.

“OCSJX and the DOD’s efforts to combat trafficking are very important,” Burris said. “We understand this tarnishes the image of America and it affects our relationships with other countries.”
While deployments have declined, it is even more important to keep OCS skillsets including identification and handling of CTIP violations sharp through the annual OCSJX.

“Providing CTIP training makes OCS professionals aware that CTIP violations do happen,” said Jillian Kennedy, a part of the exercise scenario development team and a 325th Contracting Squadron infrastructure team lead at Tyndall Air Force Base, Fla. “The training also shows how we recognize violations, how we address them and how we fix them.”

Linda Dixon, Defense Human Resource Activity CTIP program manager, discussed the current common types of CTIP violations that are seen in the area of operations with exercise participants. These violations include poor living conditions for workers and recruiters who charge exorbitant fees to place workers in jobs.

“The main thing is you need to know who you’re doing business with,” Dixon said. “Do they understand the labor laws in the area where you’re going to be performing? Do they understand what the policies are for the U.S. government? As far as our CTIP zero tolerance policy?”

In addition to the presentation by Dixon, the exercise participants received classroom instruction on CTIP. As part of the exercise scenario, participants were given simulated CTIP violations and had to properly respond to the situation in order to stop the human rights violations. The exercise’s white cell developed the simulations based on the team’s various experiences with the types of CTIP violations they have seen in the real world, Kennedy said.

OCSJX-16 is a three-week long exercise that brings together over 500 service members and civilians across the services and other agencies that are involved in the OCS process. The exercise focuses on supporting the warfighter and uses a U.S. Southern Command scenario of defending the Panama Canal and providing humanitarian assistance.

The DOD announced there were 52 reported CTIP violations last year.

If you suspect an incident of human trafficking report it to the DOD Inspector General hotline at 1-800-424-9098 or www.dodig.mil/hotline. Or you may contact the National Human Trafficking Hotline at 1-888-373-7888.