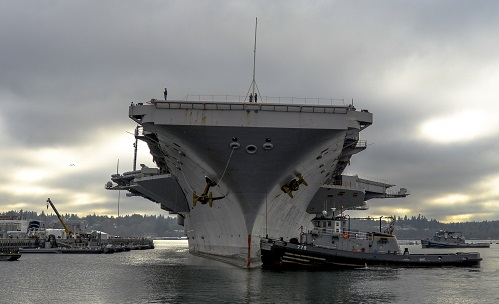 “We’re out here today to pay our respects to all the service members that made the ultimate sacrifice for our great country,” said Chief Aviation Ordnanceman Russell German. “The 21-gun salute is a tradition that Nimitz is proud to be a part of.”

A 21-gun salute is a form of commemoration that can be dated back as far as the 14th century, when cannons and firearms first began being used. Warships originally would fire a cannon seven times. Land batteries had a larger supply of gunpowder, allowing them to fire three guns for every cannon fired from the warships — hence the 21-gun salute.

The 21-gun salute became the highest honor a nation rendered, and the United States agreed upon the international salute of 21 guns August 1875.

Although times and traditions have changed throughout the years, the importance of honoring those who have paid the ultimate price has stood the test of time.