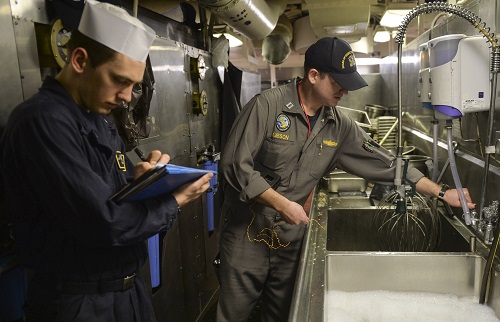 INSURV is a congressionally-mandated inspection of U.S. Navy ships. The inspection is a thorough check of the ship’s material condition to ensure mission readiness.

INSURVs are typically conducted every five years aboard Navy ships. Nimitz’s last inspection was completed in 2010.

More than 200 inspectors came aboard Feb. 13-14 to examine more than 400 demonstrations and inspect nearly 100,000 pieces of equipment.

There are also small details which came under the microscope such as minor safety concerns, cleanliness, and the ship’s habitability which together make up an integral part of the ship’s operational ability.

“The hard, tedious work and long hours the Sailors on this ship endured to get her ready might have seemed like they wouldn’t end, but it’s really started to show and it’s paying off,” said Aircrew Survival Equipmentman 3rd Class Bo Noonkester. “I think every one of us has something that we can be proud of when we look at Nimitz now.”

Nimitz kicked off the first phase of INSURV December 2015, and has been preparing for the final inspection for more than a year by updating equipment, refurbishing old hardware, training new Sailors, and deep cleaning all of the ship’s spaces.

“Sailors are finally figuring out what this ship should look like all the time, and it’s never looked better,” said Master Chief Aviation Ordnanceman Kenneth Hecker, Nimitz’s INSURV leading chief petty officer. “The ship has never pulled together like this before and become such a seamlessly working team.”

“Your hard work paid off,” said Capt. Kevin Lenox, commanding officer of Nimitz, while addressing the crew. “You guys stepped up and worked hard the past two weekends, and every Sailor stepped up and executed very well. INSURV told me they’ve never had a carrier finish on a Thursday, but we did because we executed the plan so well. Great job, everyone.”

The conclusion of INSURV has shown Nimitz is up to the Navy’s standard of material readiness and is one step closer to her 2017 deployment. Nimitz will undergo Composite Training Unit Exercise (COMPTUEX) in the upcoming months.