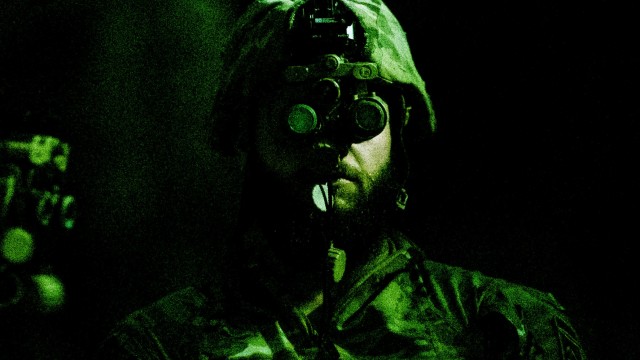 “This is the end of a long road for these two programs,” said Bill Slaven, test officer with the Airborne and Special Operations Test Directorate.

“Both programs had suffered impacts to their acquisition time line due to the influences of COVID-19 in the preceding months.”

The STORM II is a rifle-mounted laser range finder with infrared aiming capabilities.

It is intended to provide Soldiers accurate range-to-target information when employing organic and indirect weapons systems.

During this phase of testing, the STORM II was jumped exposed during MFF operations, providing the critical test conditions of rapid altitude change, temperature and atmospheric pressure existing during free-fall jumps.

SPC Jacob O’Brien of Easton, Massachusetts, with Alpha Company, 2nd Battalion, 325th Infantry Regiment, 82nd Airborne Division was one of the STORM II primary operators during all phases of testing.

“I like it!,” he said of STORM II. “It’s a very durable system that attaches securely to my rifle and maintains its zero.”

STORM II testing was delayed due to the influences of tropical weather in November but completed in early December with the final free-fall test trials by Soldiers from the 3rd Special Forces Group.

However, unlike previous tests of this nature conducted during early 2020, unique challenges surfaced due to the ongoing COVID-19 pandemic at Fort Bragg, which brought about a few new procedures.

“Military aircraft are inherently designed to deliver the maximum amount of Soldiers possible in the least amount of space, and the proximity of a jumpmaster to the jumper is non-negotiable when inspecting the lifesaving parachute of a Soldier.”

“Our goal is to keep the Soldiers participating in testing socially distant and safe during every phase of our operations,” said Slaven.

He said upon arrival each morning, participating soldiers were given temperature checks by ABNSOTD staff and assigned to a specific work bubble for the day.

“This ensured that the operational soldiers had minimal exposure to support staff and employees not directly involved with their mission,” Slaven added.

“Operational Testing is about Soldiers. It is about making sure that the systems developed are effective in a Soldier’s hands and suitable for the environments in which Soldiers train and fight,” said Col. Brad Mock, Director of ABNSOTD.

About the U.S. Army Operational Test Command:
The Fort Bragg, North Carolina-based ABNSOTD plans, executes, and reports on operational tests and field experiments of Airborne and Special Operations Forces equipment, procedures, aerial delivery and air transportation systems in order to provide key operational data for the continued development and fielding of doctrine, systems or equipment to the Warfighter.

The U.S. Army Operational Test Command is based at West Fort Hood, Texas, and its mission is about ensuring that systems developed are effective in a Soldier’s hands and suitable for the environments in which Soldiers train and fight. Test units and their Soldiers provide feedback, by offering input to improve upon existing and future systems with which Soldiers will ultimately use to train and fight.