Automatic notifications will go out for various actions, including when a supervisor must certify a step increase, complete an appraisal for a step increase or certify a career promotion. Supervisors and second line supervisors will also be notified when temporary or limited appointments or temporary promotions are near expiration.

“Supervisors may not be aware that an action is due, or an immediate supervisor position may be vacant, so email notifications will also go to second line supervisors to help prevent problems that occur because of late personnel actions,” said Eva Askins, AFPC Civilian Future Operations Branch.

The new capability was implemented Nov. 11, but it will not replace the existing process.

Civilian Personnel Sections have access to nightly generated notices and weekly suspense action reports that they use to manage workflow, as well as ensure requests for personnel action submissions are timely, Askins explained.

That won’t change. Even after the new process is implemented, those weekly reports and nightly notices will continue. The new process just involves supervisors earlier, so they will be better prepared to take actions when they are due, Askins said.

“Supervisors have actions they must take in each case and if they delay, they may find themselves unable to retain an employee, and employees may find themselves out of work or being paid erroneously,” she said. “The automatic notification not only reminds them that an action is due, but gives them direction on how to accomplish the task.”

Notifications will be sent to those people identified as first or second level supervisors, based on the Defense Civilian Personnel Data System Position Hierarchy Tool.

“If there isn’t a first or second level supervisor identified with a valid email address in DCPDS, a notification won’t be generated. Maintaining the Position Hierarchy Tool is vital to support current and future Air Force initiatives, and it is imperative that DCPDS accurately reflects supervisory data,” said Askins.

Supervisors can now view actions due in the suspense folder in MyWorkplace, accessible via the myPers website and the Air Force Portal. 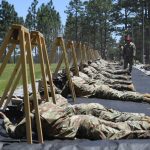