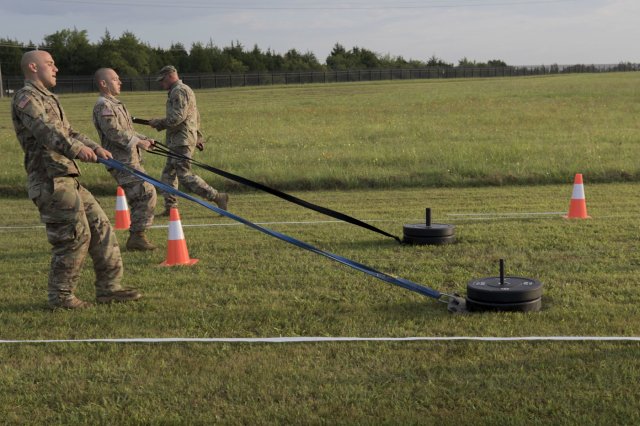 JULY 24, 2019 – For the first time in history, the 14 Best Warrior Soldiers performed a modified version of the six-event ACFT which included hurling medicine balls over their heads, performing dozens of push-ups and showing their strength on the pull-up bar. Capt. Vanessa LaGrange, the only level II ACFT administrator in the Oklahoma Army National Guard, was excited to see the Warriors implement this test for the first time.

“Typically they’ll show up in their Physical Training (PT) uniforms, but they are here in their Operational Camouflage Pattern uniforms,” said LaGrange. “The two-mile is a cross-country run instead of the normal laps around a track. Other than that, this is the updated and soon-to-be-in effect Army physical training test.”

As the ACFT approaches Army-wide standardization, Best Warrior contestants had questions about how they will do in each event.

“It’s something different and I’m not sure I’ve done all my research yet to find out all the techniques for it,” said Sgt. 1st Class Jamison Yager, Best Warrior competitor with the Michigan Army National Guard. “I need to work on hand-release push-ups and need to find out what protocol they’re going to use, hands to the side or hands beneath the body.”

The ACFT has seen field testing since 2018, and many units are already applying the fundamentals of this PT test into their everyday workouts. Just like the former APFT, tips and tricks on how to improve your performance will come as the ACFT is implemented.

“I can definitely make my technique better,” said Spc. Andrew Brotherton, Best Warrior competitor and member of the North Carolina Army National Guard. “There’s a bunch of things you can do to shave off some seconds just by knowing the correct techniques.”

The ACFT drastically varies from its APFT predecessor, with gender and age-neutral criteria, and standards tailored towards specific job fields. The Army National Guard will fully adopt the new test in October 2020, with Citizen-Soldiers and their active-duty counterparts maintaining the same standards.

The Army National Guard Best Warrior Competition is the culminating test for the top 14 noncommissioned officers and Soldiers from seven regions across the nation who to compete in a week-long test of soldiering skills and abilities to take home the title of 2019 Army National Guard Soldier and NCO of the Year. 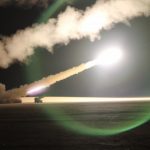