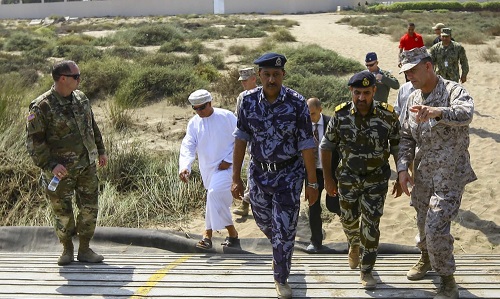 NEO exercises serve to enhance a critical mission set by the U.S. Navy and Marine Corps to quickly provide security and safety to U.S. citizens abroad during a natural disaster or contingency. Marine group forces help safely evacuate personnel to the ship as Sailors aboard provide food and medical attention.

The ARG/MEU provides a balanced and scalable sea-based crisis response force capable of accomplishing any mission ranging from combat to humanitarian assistance.

As the first NEO exercise conducted in Oman by U.S. Navy and Marine Corps assets, the exercise validated the capabilities of the ARG/MEU to execute the critical mission set of crisis response.

“Our units are integrated with the U.S. Embassy in Muscat, Oman to ensure that we are ready to respond to any contingency as an integrated naval amphibious force,” said Donovan. “While this is an unlikely mission in Oman, it’s important to work with all our regional embassies to ensure our plans are up to date and our procedures are well practiced.”

The NEO exercise strengthened the solid relationship with the Sultanate of Oman, demonstrating commitment to conducting future cooperative exercises.