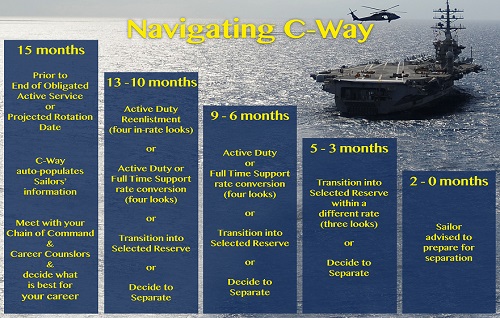 JULY 29, 2016, WASHINGTON (NNS) – Career Waypoints, or C-Way as it is commonly referred to, has been used since 2013 as the Navy’s primary method of providing Sailors future career options including reenlistment, rate conversion, or transition into the Selected Reserves.

While some Sailors are very familiar with C-Way, others are not. However, the most important thing for every Sailor to know is they have the ability to review their reenlistment options early and often with their command career counselors and chain of command.

“C-Way is designed for Sailors to best help navigate their careers, whether they are reenlisting or if they convert to a different rate,” said Fleet Master Chief of Manpower, Personnel, Training and Education (MPT&E) April Beldo. “It allows the Navy to make sure that the health of our communities remains stabilized while providing Sailors the best opportunities for advancement.”

Sailors should meet with their command career counselor 15 months before their soft end of obligated active service (SEAOS) or projected rotation date (PRD) to discuss their options.
The Career Navigator skill set list, located on the C-Way web page, assists command career counselors and Sailors on their career decisions before submitting a C-Way application for reenlistment or conversion.

“The Career Management Program or Career Navigator is not only about transition, it is about being able to manage your career earlier, and Sailors having the ability to make choices,” said Beldo. “It enables the Navy to continue watching the health of each rating and the health of the communities while providing Sailors with the best possible opportunities.”

Once Sailors have made a decision, command career counselors submit their application until the request has been approved. Those Sailors with a SEAOS will have four in-rate reviews starting at 13 months, followed by four conversion reviews, and then three selected reserve (SELRES) only reviews.

Those Sailors in the Professional Apprenticeship Career Track (PACT) program should work with their career counselors to ensure that their applications are submitted correctly.

The Bureau of Naval Personnel in Millington, Tennessee, approves requests for reenlistment through the C-Way system for all Active Component and FTS E3-E6 Sailors with 14 years or less of service. Most Sailors’ applications are approved during the first or second C-Way application window.

“The monthly results for in-rate approval, conversion and SELRES usually releases results within ten business days after that month’s requests have been submitted,” said Earl Salter, deputy director of Career Waypoints. “If you are a first class petty officer or applying for a rate that has an auto-approval option, approval is instantaneous, he said.

C-Way automatically generates reenlistment applications 15 months prior to a Sailors’ PRD for those who have less than 24 months between PRD and SEAOS. For SEAOS at 10 to 13 months, Sailors have several choices, including four in-rate looks for active duty or Full Time Support (FTS) in-rate reenlistment, active duty or FTS rate conversion, transition to SELRES or separation from the Navy.

“Throughout the C-Way process, Sailors need to be proactive and make sure that their packages are up to date,” said Beldo. “Any time something changes, such as earning a warfare device, receiving an award or a personnel evaluation, Sailors should check with their command career counselors to make sure their applications reflect the latest information.”

If Sailors are not selected for an in-rate reenlistment, they can then request conversion to a different rating they are qualified for from the open rates list during the nine to six month range. Sailors will receive four conversion looks or can choose to transition into SELRES or separate from the Navy. Rate-conversion quotas are limited, and once a Sailor is selected, that decision is final.

At five to three months, Sailors may submit an application for transition into SELRES if they were not selected for reenlistment or rate conversion. During that timeframe, Sailors will receive three looks for transition to SELRES within a different rate. If not selected, then the Sailor must separate from the Navy.

“Navy leadership has worked hard to make enhancements to C-Way so that it can be the best for both the Fleet and the Sailors,” said Salter. “Retaining the best and brightest Sailors for the Navy is the most important thing for the Fleet.”