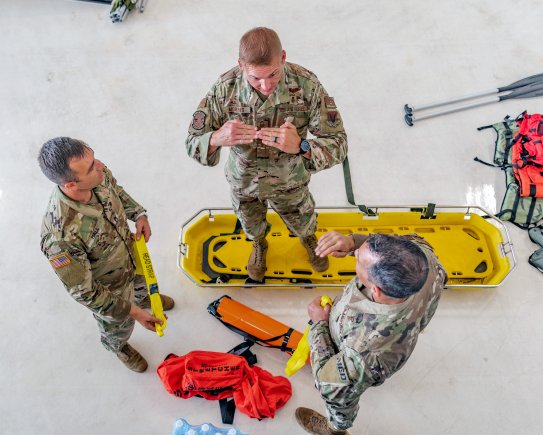 SEPTEMBER 5, 2019 – As Hurricane Dorian makes its way along the Florida coast, the National Guard is in place to respond, said Air Force Gen. Joseph Lengyel, chief of the National Guard Bureau, during a Pentagon press conference yesterday.

“As I stand here, there are more than 5,500 National Guard members in four states, ready to provide full-spectrum recovery and support to all those impacted by Hurricane Dorian,” Lengyel said. “A preponderance [of those forces] are in Florida.”

According to Guard officials, the Florida National Guard has a little more than 4,500 Soldiers and Airmen mobilized for response efforts.

Georgia, South Carolina and North Carolina National Guard are positioning Soldiers and Airmen ahead of the hurricane as it proceeds along its path, Lengyel said.

“[Guard members] will be poised to work and ready for their communities and states — from the inception of preparation, through the response, through the recovery — until the [local first] responders can handle this without any military assistance,” Lengyel said.

Part of the Guard response, he added, includes the Emergency Management Assistance Compact, which allows Guard elements in states affected by a hurricane or other disaster to request Guard personnel from other states should additional assets be needed.

“The preparation for this hurricane started last spring,” he said.

At that time, Guard leadership in each state mapped out their available capabilities as well as what additional assets may need to be shared with or drawn from other states. Additionally, pre-arrangements were made detailing how Guard elements in one state would automatically support response efforts in another state.

A similar meeting is held each spring, said Lengyel, as overseas deployments and other training requirements may affect what assets are available. The goal is to ensure quick response in times of need, he said, adding that less time and distance to getting assets on the ground equals more lives saved.

“It’s an efficient system,” Lengyel said of the EMAC and yearly planning efforts.

He also stressed how collaboration with local and state as well as federal agencies and other military entities — such as the Federal Emergency Management Agency and U.S. Northern Command – makes for an effective response and recovery effort.

“We stay in sync with NORTHCOM, FEMA and all our partners associated with the hurricane response,” he said.

While Dorian continues on its path, Lengyel stressed that the Guard remains flexible in its response preparations.

“As this storm moves north, Georgia, South Carolina and North Carolina will in succession, I believe, add more forces to National Guard structures that are in place.”

Lengyel added that Guard units from throughout the country are there if needed.

“The National Guard can also draw upon from a proven and highly trained force of over 450,000 men and women — Soldiers and Airmen — from all 50 states, three territories and District of Columbia if needed,” he said. 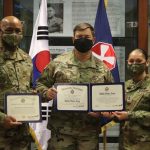