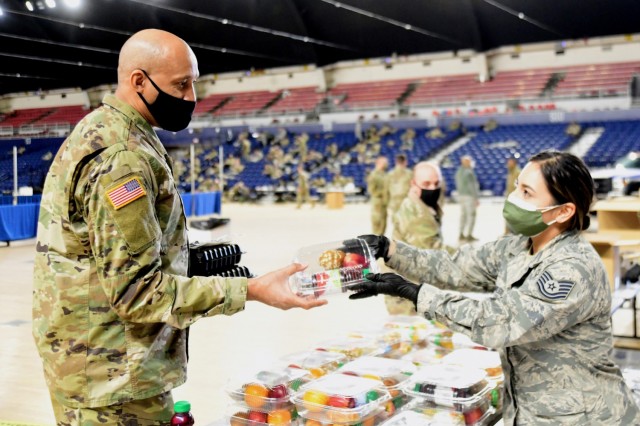 JANUARY 18, 2021 – The thousands of National Guard members supporting the 59th presidential inauguration are receiving proper lodging when off duty and three meals a day, according to Guard officials.

Establishing that support in a short timeframe is a testament to the Guard’s readiness, said Army Gen. Daniel Hokanson, chief of the National Guard Bureau.

“Moving 25,000 Soldiers and Airmen to D.C. from each of the states and territories in less than a week is unprecedented,” he said. “It speaks volumes about America’s National Guard.”

That number will rise as more Guard members flow into the District.

Seaborn said the efforts of Guard members who are protecting the Capitol are matched only by the dedication of the food-service specialists — who unpack, sort, distribute, and in some cases, serve the meals.

“This is an extremely large and important mission,” he explained. “If an Airman or a Soldier is not fed properly, they are not going to perform their jobs properly.”

Additionally, Guard members positioned at or near the Capitol Hill area are working in shifts and are encouraged to rest on designated Capitol-area grounds when they can while others stand watch.

But when they are off duty, they have appropriate lodging throughout the District and the National Capital Region, Guard officials added.