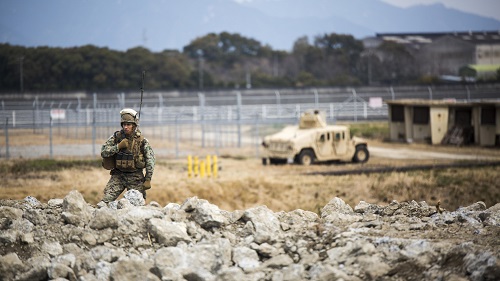 The exercise is the capstone event for MWSS-171’s annual training plan, serving as a building block for increasing squadron proficiency in aircraft salvage and recovery and forward command and control.

“We pulled all elements of 171 for this exercise,” said U.S. Marine Corps Gunnery Sgt. Ysac Perez, the air base ground defense staff noncommissioned officer in charge for MWSS-171. “From motor transportation providing us vehicles, headquarters squadron providing us weapon systems and engineers with all the equipment needed to conduct a walking position.”

By utilizing all elements of MWSS-171, the exercise assessed various components of the squadron’s responsibilities associated with a downed aircraft in a garrison or hostile environment.

“It benefitted us to do it at home on the air station,” said Perez. “We learned the best response routes and obstacles that have to be overcome. MWSS-171 has to be prepared to conduct a recovery mission in this area of operation.”

Perez said the Marines participating have an increased confidence while training close to home which builds efficiency, and that translates well when applied to situations that occur anywhere else.

The basics for the Marines undergoing the training were to cordon a crash site, guide bystanders and provide security.

“I expected my Marines to be able to do their job,” said U.S. Marine Corps Sgt. Daniel Feeney, squad leader for motor transportation with MWSS-171. “It’s important that when called upon they can tactically and efficiently execute and show that we are the nation’s force in readiness.”

Along with the junior Marines, key leaders in the exercise also increased their knowledge and gathered intel from the training to pass to their companies and train their Marines.

“One of the best things I’m taking away from this is maintaining the basics and keeping it simple,” said Feeney. “When Marines remember those things while there are a million other things going on, it helps keep them focused and successfully complete the task at hand. By doing just that it makes our squadron better as a whole.”

Through execution of all orders and following protocol, the Marines proved their abilities in their jobs and abilities to exceed expectation.

“The exercise benefits the air station by giving clarity and comfort to the commanding officer,” said Perez. “It shows him that we are capable of completing our mission efficiently and professionally.”