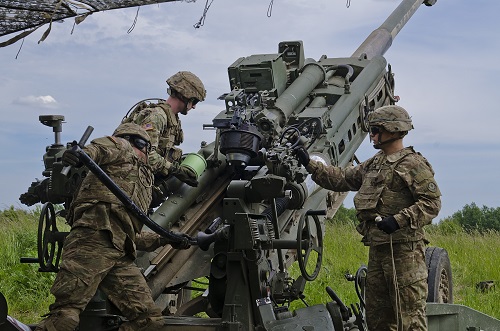 The combined training is part of Saber Strike 17, a month-long exercise from May 28-June 24, 2017, which is the seventh iteration of a long-standing U.S. Army Europe-led training exercise designed to enhance interoperability and to improve joint operational capabilities across a variety of mission sets among NATO Allies and regional partners.

“This combined training is valuable,” said Capt. Andrew Cotter, Commander, Bravo Battery, Field Artillery Squadron, 2nd Cavalry Regiment. “We’re learning a lot about what we can do (collectively) and how to work through limitations that we encounter, which a lot of times can be just as valuable as everything going well.”

The Situational Training Exercise events occurring during the first several days of Saber Strike are active training exercises designed to teach Soldiers and leaders specific skills that they will use later during the Field Training Exercise portion of the exercise. The FTXs are decisive action focused, battalion-level training exercises that mimic real-life situations.

This year’s FTXs will focus on the Enhance Forward Presence battle groups and their interaction with units from all participating countries. The FTXs will also include company-level STXs conducting offensive and defensive tactical tasks.

“This is a really beneficial opportunity for everyone participating,” said Capt. Bradley Budd, Fire Support Team Commander, Mustang Troop, A Squadron, Light Dragoons. “Every nation has their own training background, their own expertise, and their own operational experiences. Integrating all that experience into one combined force means we can balance off of one another and share lessons learned from one another.”

“Any training that we may be doing that is useful to the battle group, we can combine it and make it stronger, which makes a better deterrent force,” said the British commander.

Cotter also expressed a mutual opinion on the U.S.’s priority to maintain a ready and postured force focused on deterring and avoiding conflict.

“We’re here to deter aggression and if necessary defend,” he said. “That’s only possible if we have a credible force out here to do it. You can only gain that credibility by going to the field and demonstrating combined training exercises. Not just training with 2nd Squadron and Bravo Battery, but building that collective capability with the Romanians and the British is necessary to showcase a credible and proficient force that is an actual deterrent in this region.”

The U.S. continues to invest in military exercises such as Saber Strike with NATO Allies and partners to demonstrate resolve, build resilience and foster trust while enhancing interoperability.

“Nations working alongside one another especially in this capacity that we are working in, we are operating as one combined battle group, in order to work alongside anyone whether or not in your own army or someone else’s army you need to have that embedded trust,” said Budd.