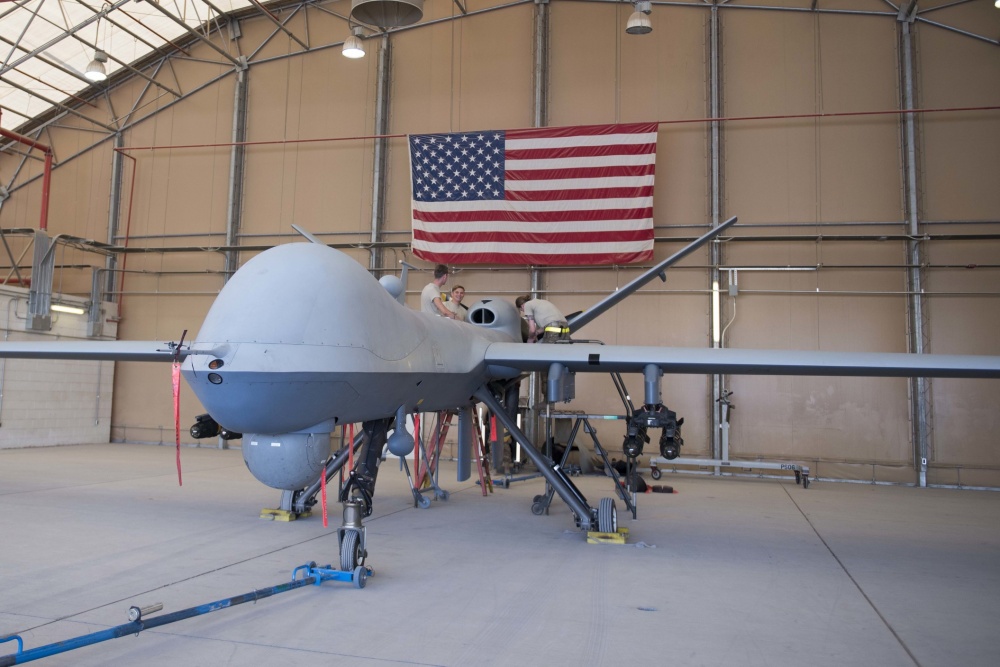 The 62nd Expeditionary Attack Squadron at Kandahar Airfield operates the largest fleet of MQ-9s in the world performing launch and recovery assets.

With missions lasting almost an entire day, the ability to switch out pilots and new sensors in shifts enables the team to be on top of their game bringing the fight to the enemy, said U.S. Air Force Capt. Aileen Herrera, 62nd EATKS pilot. The mission has two facets, she added.

“There is launch and recovery and the mission control side of the house,” the captain said. “For our side, you need to have line of sight to safely launch and land and the aircraft, but once we get above a certain altitude, we release the controls to crews back stateside.”

The MQ-9 utilizes satellites in space to perform their main mission. However, an antenna fixed to the ground provides the launch and recovery team to carefully land the multi-role asset without the worry of delay.

“We are here because during the critical phases of flight between taking off and landing, you do not want any delay,” said Senior Airman Stephen Kong, 62nd EATKS sensor operator. “The delay could be detrimental to the aircraft and could possibly cost you your job.”

Kong works the camera sensors at the bottom of the aircraft performing the vital role of intelligence, surveillance and reconnaissance. Moreover, Herrera sees him as her co-pilot. The MQ-9 allows enlisted aircrew the unique role of being a part of the strike phase, Herrera said.

“I can’t do my mission, my job, without them doing theirs,” she added. “I think that’s one of the greatest opportunities for these Airmen. I mean, [Kong’s] my co-pilot, how many enlisted co-pilots are there in the Air Force?”

Each part of the MQ-9, deployed or stateside, is imperative to the success of the mission in Afghanistan, with troops on the ground noting the importance of the asset.

“When we are not flying, the troops on the ground are calling to see how soon we can get back up there,” said Herrera. “You can really see the impact we have throughout the area, and it feels great knowing our Airmen are appreciated.”