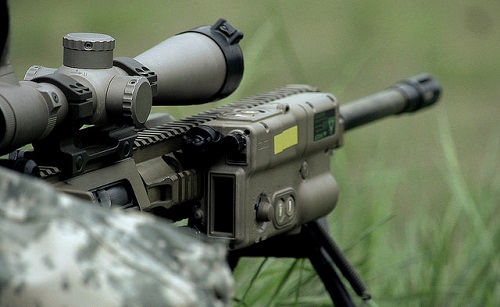 JULY 8, 2016, MARINE CORPS BASE QUANTICO, Va. – Marine Corps Systems Command is equipping Marines with a new range finder that will improve their accuracy and lethality on the battlefield.

The Micro Laser Range Finder, or MLRF, is a multifunction laser system that can be used in a variety of battlefield conditions. Whether mounted on a tripod, on a weapon, or held by hand, the MLRF allows Marines to determine the range to targets, control fires and illuminate targets at night. It also provides Marines with unprecedented accuracy on the battlefield.

“The PEQ 15 was just a laser dot; it didn’t go far enough and there wasn’t any range capability,” said Joseph Bernardoni, lead lifecycle logistician for Optics and Non-Lethal Systems in MCSC’s Infantry Weapons Systems. “The MLRF gets you on target faster and with less rounds. And you can see the laser at 500 meters up to 10,000 meters with a day optic.”

The built-in infrared light is another feature that helps guide Marines in battle, according to Bernardoni. Because infrared light is invisible to the naked eye, the MLRF allows Marines to illuminate the battlefield under the cover of darkness.

“At nighttime, if they’re able to light up a big area with infrared light, the other supporting Marines, with their night vision goggles, will also be able to see that,” said Bernardoni. “Without it, the infantry rifleman doesn’t see anything that far.”

The MLRF is designed for use with the M2 .50 caliber heavy machine gun and MK-19 40mm grenade machine gun, said Gunnery Sgt. Alfredo Uribe, equipment specialist for Optics and Non-Lethal Systems in IWS. It improves upon the former PEQ 15 laser system, which had a range of only 2,000 meters allowing Marines to improve their shot accuracy from a distance and hit their target using less rounds.

“If Marines are put in a fighting position alongside infantry line companies, they can identify the distance, or range, [from which] the enemy is coming—like if there’s a truck approaching—then call for fire, range and hit the target along with the other machine guns,” said Bernardoni. “It is faster than shooting a bunch of rounds, seeing what you’re missing, and repeating the process.”

Infantry Weapons Systems acquires and fields systems that give Marines the firepower—lethal and non-lethal—to suppress both infantry and armored enemy resistance. Among these systems, the program office provides lasers—like the MLRF—to help Marines put rounds on targets in all conditions. IWS fielded the MLRF to Marines across the Corps this Spring. 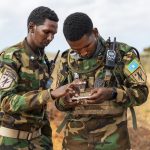 MAY 17, 2022 – For 16 months now, American military personnel in the U.S. Africa Command area of responsibility have provided advise-and-assist support to forces in Somalia on an ad hoc basis — traveling into the country when needed and then leaving afterward. U.S. forces are helping Somali forces in the fight against al-Shabab. But […]