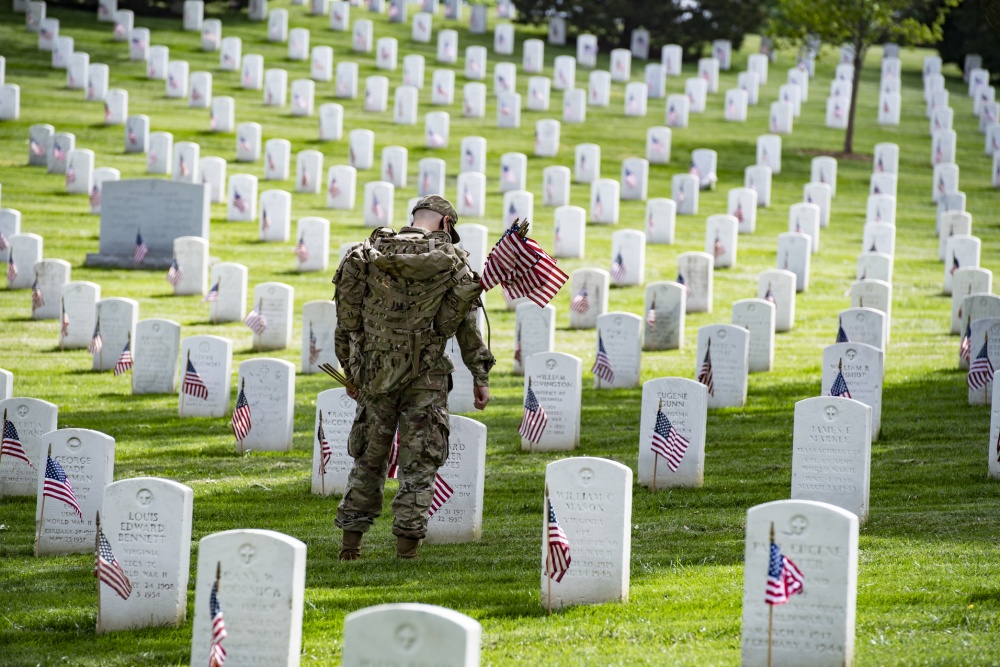 Veteran’s groups, active-duty military units, government officials and Families turn out for ceremonies and to place flags on veterans’ graves in cemeteries across the country.

The Joint Readiness Training Center and Fort Polk’s Memorial Day ceremony was held May 21 at Warrior Memorial Park. This year, as a result of the COVID-19 pandemic, the ceremony took on a new look, with social distancing, the wearing of masks and a live Facebook stream of the event.

“Today we honor the sacrifices of thousands of heroic American Soldiers, Marines, Sailors and Airmen who dedicated their lives to defending the nation and our freedom,” he said.

Frank spoke of the origins of Memorial Day following the Civil War and how 152 years later, the day is as real for today’s generation as it was for the Civil War generation.

“Warrior Memorial Park has many historic monuments honoring the sacrifices of Soldiers from several conflicts,” he said.

“Memorial Day has a significant meaning for our generation — from the morning of September 11th to the on-going combat deployments we witness here at Fort Polk.”

Frank said the Global War on Terror memorial, with its inscription of the names of 96 fallen Fort Polk Soldiers, is a reflection of the JRTC and Fort Polk’s Warrior Ethos.

“What Soldiers throughout Fort Polk see in the names are acts of uncommon battlefield courage in Iraq and Afghanistan, fellow platoon members sharing a light-hearted joke before a Baghdad patrol, the valor of combat medics running into enemy fire to save the life of a wounded teammate in Nangahar, the compassion of American Soldiers assisting a poor Iraqi family, and the determination to never leave a fallen comrade,” he said. “After this ceremony, take time to view the names on this monument; you will see these same sacrifices as you look at the names of our fallen Fort Polk Soldiers.”

“May we never forget how special it is to live in a nation that has brave citizen volunteers step forward to become members of the world’s greatest military force,” he said.

The history of Memorial Day actually began three years after the end of the Civil War, when the head of the Grand Army of the Republic, an organization of Union veterans, established Decoration Day as a time for the nation to decorate with flowers the graves of those who were killed during the war.

The first large observance was held May 30, 1868 at Arlington National Cemetery, across the Potomac River from Washington, D.C.

Various Washington officials, including Gen. and Mrs. Ulysses S. Grant, presided over the ceremonies. After speeches, children from the Soldiers’ and Sailors’ Orphan Home and members of the GAR made their way through the cemetery, strewing flowers on both Union and Confederate graves, reciting prayers and singing hymns.

Although several cities claimed to be the first to hold a Memorial Day ceremony, the “official birthplace” was designated by President Lyndon Johnson and Congress as Waterloo, New York, in 1966. There, a ceremony on May 5, 1866, honored local veterans who had fought in the Civil War. Businesses closed and residents flew flags at half-staff.

It was not until after World War I that the day was expanded to honor those who have died in all American wars. In 1971, Memorial Day was declared a national holiday by an act of Congress, though it is still often called Decoration Day. It was then also placed on the last Monday in May.

The crowd attending the first Memorial Day ceremony at Arlington National Cemetery was about 5,000 people. Then, as now, small American flags were placed on each grave — a tradition followed at many national cemeteries today. In recent years, the custom has grown in many families to decorate the graves of all departed loved ones.