SOUTHWEST ASIA (AFNS) — After the loud explosion, smoke quickly billowed from the front of the auditorium. Several service members were slowly being engulfed in a thick white cloud which limited visibility to little more than three feet.

Those not hurt by the simulated explosion cautiously rose from the floor, working their way to the nearest exit, each helping those injured along the way. Within minutes, security forces were at the Coalition Compound Theater – ground zero, of the installation’s mass casualty exercise.

The exercise was used to test first responders and medical personnel on their ability to quickly and effectively respond a catastrophic event.

Upon receiving notification of the explosion, the 379th Expeditionary Security Forces Squadron sent the closest team available to assess the situation. After performing immediate medical aid to the simulated victims with minor injuries, a second team soon arrived and immediately conducted a perimeter sweep.

“You always have to be ready, especially in a deployed environment; where threats are a lot closer than if you were in the states,” said Capt. Joshua Lawson, the exercise branch chief.

Once more security forces members arrived on scene they would have more than enough people to maintain a perimeter and move forward in securing the inside of the theater. However, after opening the door, a blanket of smoke rushed out. The security forces team realized the potential of an active fire still engulfing the theater and alerted the fire department.

The 379th Expeditionary Civil Engineer Squadron Fire Department got the call and sent as many fire fighters to the area as possible.

Following a quick situational briefing by the on-scene security forces members, each member suited up and split into two teams. One team would work on containing the simulated blaze in the auditorium while the other would evacuate as many survivors from the building as possible.

“We were alerted to an explosion in the theater and acted accordingly,” said Airman 1st Class Cameron Teamer, a 379th ECES firefighter. “We prepare for situations like this.”

One of the main priorities was to save as many lives as possible. The firefighters would spend the next hour fighting through a thick cloud of smoke carrying more than 50 pounds of safety gear to do just that.

“Our primary job was to contain and extinguish the fire,” said Staff Sgt. Matthew Raimo, a 379th ECES firefighter. “However, when there is a situation like these, saving lives is at the forefront of our minds.”

“It’s very important to train like each exercise is real,” said Ramio. “Typically we spend hours each month going over various scenarios so that when these events happen we are prepared to act accordingly.

As the simulated survivors were evacuated, they were taken to the medical staging area where they received treatment for their injuries.

The first medical responders on scene, the Expeditionary Aerospace Medical Flight wasted no time in performing on the spot medical care for individuals playing incident victims. The victims were then transported to the medical staging point where they were then organized into groups for intensive care and minor injury victims.

Once the victims were organized, medical teams began to stabilize each victim until ambulances arrived.

“These exercises increase our readiness,” said Senior Airman James Hammos, 379th Expeditionary Maintenance Squadron aerospace mechanic and simulated victim. “They help us to find our weaknesses in procedures so we can fix them just in case a real-world scenario happens.”

The ambulances and medical teams from the 379th Expeditionary Medical Group simulated evacuating each member to the installation hospital and finding off-base care for individuals in need of serious help.

The exercise gave an orientation to service members who have never seen first responders work together to respond to an incident.

“There are many Airmen who have never participated in an exercise of this magnitude,” said Williams. “This was a great opportunity for them to go through a scenario, utilize what they have learned, and hone their skills to make the installation more efficient in the way it responds to such an event.”

The combined efforts of the first responders around the installation were instrumental to the success of the exercise and helps prepare Airmen to defend the base and the region should they come under attack, said Chief Master Sgt. William Harner, 379th Air Expeditionary Wing command chief.

“We could face situations like this in real world any day,” said Harner. “We need to ensure that our first responders and all our forces are ready to execute their responsibilities.” 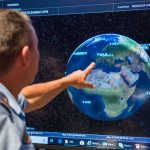