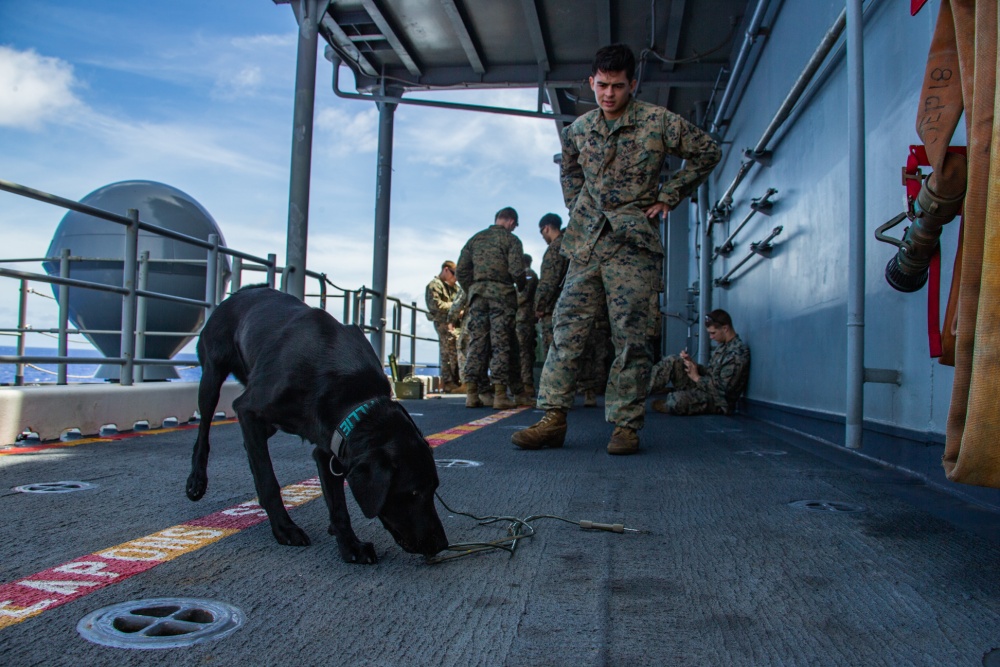 MARCH 30, 2020 – In 1918, the Marine Corps earned one of its many well-known nicknames at the battle of Belleau Wood. After a ferocious offensive, the Marines forced the Germans into a retreat. Marine Corps legend has it that in the wake of their withdrawal, one German soldier left a journal in which he described the Marines as “Teufelhunden”, meaning “devil dogs”.

While Marines continue to fight with the courage and ferocity that earned them this nickname, one group of Marines rises above the rest in truly living up to this moniker. These are the Marine Corps’ military working dogs (MWD).

Loyally accompanying warriors on battlefields around the world since ancient times, dogs have long provided militaries with their special skills and dogged determination in battle. During World War II, Marines used MWDs extensively to root out well-concealed enemy positions during the island-hopping campaigns in the Pacific. At the height of the Global War on Terror, MWDs served Marines well in Iraq and Afghanistan, using their keen senses to detect improvised explosive devices and saving numerous lives in the process. Even more recently in October of 2019, a Belgian malinois MWD named Conan took part in the successful special operations forces raid to kill Islamic State leader Abu Bakr al-Baghdadi in the Idlib province of Syria.

In the Marine Corps of the 21st century, MWDs are highly trained operators, putting their natural abilities to good use protecting Marines in a variety of complex environments. Specifically, MWDs are able to detect improvised explosive devices with their keen sense of smell, and can capture high value targets using their powerful nonlethal bite capability. When attached to an already formidable squad or platoon of Marines, these fierce dogs also heighten the unit’s intimidation factor toward potential foes.

The Marine Corps relies on German shepherds, Belgian malinoises, and labrador retrievers to fill its MWD program. The first stop for these motivated pups is Lackland Air Force Base in Texas, where all U.S. MWDs are sent for training. The length of boot camp is based on each dog’s abilities, and the instruction focuses on teaching obedience to orders, tracking and attacking, and physical fitness. After completing their basic training, most dogs spend six to ten years in the military before transitioning and retiring around age ten.

In order to tap into these dogs’ skills, the Marine Corps relies on military working dog handlers – specially trained law-enforcement Marines that can attach to infantry and reconnaissance units in order to add a nonlethal capability as well as enhance the unit’s situational awareness to threats.

After training, Marine Corps law enforcement and special operations units throughout the world receive their dogs and pair them with a handler. In garrison at their units, MWDs train just as all Marines do, regularly going on field operations to hone their skills in both urban and field environments, and even running special obstacle courses to stay strong and agile, all alongside their trusted handler. The process of finding the right handler and dog pair is not an exact science; units will shuffle dog handlers around to get the right combination between the abilities of the Marine and the MWD to support the necessary mission set.

“This is what I enlisted in the Marine Corps after college to do. I love my job,” Richter said. “It’s a lot of responsibility because Jack is not just my best friend, but it’s also like having both a coworker and a child that depends on you for everything, all rolled into one.”

When conducting simulated VBSS missions, Richter and Jack fast rope out of a Marine or Navy helicopter onto the target ship, ready to execute. Whether it’s rescuing hostages, sniffing for bombs or drugs, or snatching a high value target, the duo is able to seamlessly integrate with the raid force to accomplish the mission. These nonlethal force and detection capabilities are skills that MWDs and their handlers can provide to infantry units in the field as well, and are regularly practiced both in garrison and on ship.

While aboard amphibious assault ship USS America (LHA 6), deployed with the 31st MEU, MWD handlers are often found taking their partner-in-crime out for a much needed breath of fresh air and training in the hangar bay. This includes familiarization training, where dogs are acclimated to the sound of gunfire to prepare for combat operations, bite demonstrations where participants wearing thick protective bite suits get to experience the powerful jaws of military working dogs firsthand, and regular runs on the flight deck.

Wherever they go, MWDs like Jack, who is affectionately known as “Jack-Jack”, are typically the center of attention. On ship, it’s not uncommon to see large groups of Sailors and Marines taking a break from work in the hangar bay to pet MWDs as they enjoy the fresh air and ocean breeze.

Even so, typically when others pet or interact with an MWD, the interaction and affection is one-sided. A well-trained MWD answers only to their handler, and it’s this fierce loyalty that makes these dogs one of the best companions on the battlefield.

“The bond between a working dog and their handler is unlike any I’ve experienced before. We both bring something unique to the table that neither one of us would be able to do without the other,” said Richter. “A dog team is only as successful as the trust they have in one another’s abilities and knowing that in order to complete the mission, we need to work together.”

America, flagship of the America Expeditionary Strike Group, 31st MEU Team, is operating in the U.S 7th Fleet area of operations to enhance interoperability with allies and partners and serve as a ready response force to defend peace and stability in the Indo-Pacific region.