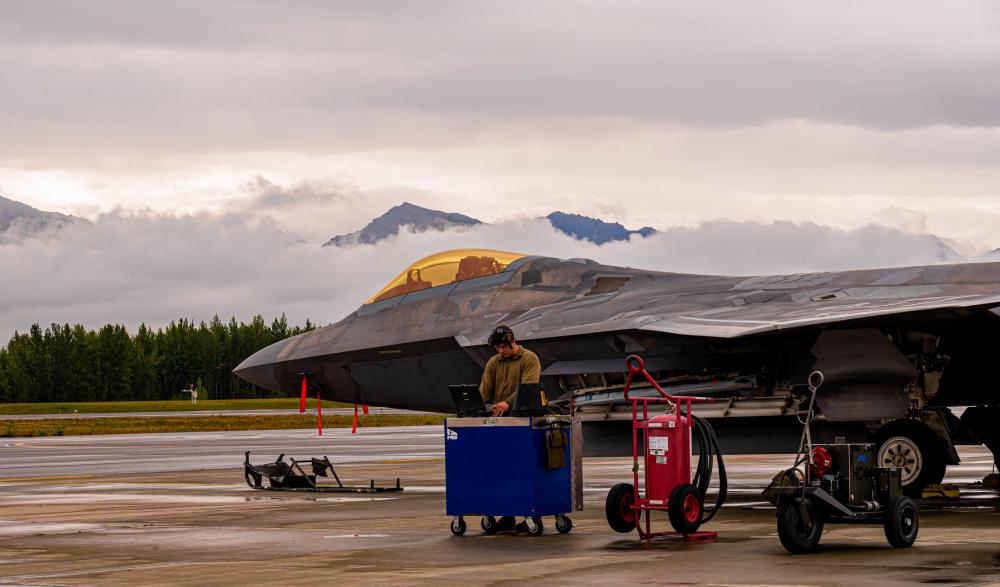 AUGUST 27, 2021 – When a car doesn’t run properly, it gets taken to a mechanic. When a U.S. Air Force F-22 Raptor needs a check, there isn’t time to send it to a shop. That’s where aircraft maintainers from the 1st Fighter Wing, 192nd Wing, and 1st Maintenance Squadron make their living.

Aircraft maintainers from the 94th Fighter Squadron, 192nd Wing, and 1st MXS traveled to Joint Base Elmendorf-Richardson, Alaska, to participate in Red Flag Alaska 21-3, applying their expertise and skillset to train in simulated real-world combat scenarios.

Red Flag gives maintainers the ability to improve the overall effectiveness of the Air Force by using their prior training to enable F-22 pilots to fly sorties and perform at the highest degree possible.

“As a crew chief at Red Flag, my job is to provide quality maintenance and make sure that the jets are ready to go up and execute whatever mission they may have,” said Airman 1st Class Dailen Holmes, 94th FS F-22 crew chief. “Red Flag keeps you sharp, and execution is one of the biggest things here. You don’t have time to mess up.”

Maintainers prepare F-22s to fly multiple sorties per day. This exercise is a fast-paced environment, challenging maintainers to outperform their status quo.

“The fuel tankers [which provide fuel to the F-22s midflight] allow our jets to stay in the air twice as long,” said Senior Airman Edwin Leiva, 94th FS F-22 crew chief. “The harder you push your equipment, the more things might come up which require our attention. If something goes wrong, we’re going to try and fix it and get these sorties going.”

For several of the younger Airmen in the 94th FS, this is the largest exercise they have participated in, allowing them to hone their skillset as F-22 maintainers.

“It’s fast-paced here, and you are expected to know what you are doing and to do it at a high level,” Holmes said. “Red Flag is helping us get better because it keeps you sharp, and execution is one of the biggest things. You don’t have time to mess up.”

While each individual has their role and responsibility, many of the younger Airmen can look toward those who have more experience servicing and inspecting the F-22. They can bolster their skills by performing maintenance checks and enabling aircraft to depart and land safely.

Every job performed at Red Flag is vital to carrying out the Air Force mission of providing air superiority worldwide at a moment’s notice.

“Red Flag better prepares us for the future,” stated Leiva. “Everything we do, whether it’s a small exercise or something like Red Flag, it all helps us get better.”

While the pilot may come to mind more often than not when someone thinks about a combat mission, the maintainers know they have their hand in the fight just as much as any.

“We’re the behind-the-scenes people,” Leiva said. “Everyone looks to the pilots during combat, but if we can’t perform our job, then the pilots can’t do theirs. So we rely on each other to carry out the mission.”