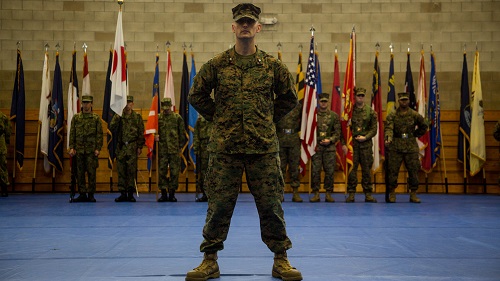 FEBRUARY 7, 2017, MARINE CORPS BASE CAMP PENDLETON, Calif. – “The purpose of the exercise is to enhance interoperability between U.S. and the Japanese Ground Self Defense Force, as well as to build amphibious capabilities for the JGSDF,” said Col. Chandler Nelms, 13th Marine Expeditionary Unit commanding officer.

Exercise Iron Fist 2017 marks the 12th iteration of the annual event. Traditionally this exercise focused primarily on tactics and operation, but this year’s focus is slightly different.

“The JGSDF Western Army Infantry Regiment is helping to shape an amphibious readiness defense brigade,” said Nelms. “The Marine Corps is the only amphibious arm of the United States military that has expertise in amphibious operations.”

The JGSDF will stand side-by-side with their U.S. counterparts and train in planning and conducting amphibious operations.

“The JGSDF will get a good look at how our Marine Corps forces integrate with our Navy forces…, the joint warfare construct and amphibious planning,” said Nelms.

We have a lot to learn from this, especially the combined arms combat operations and we are ready to learn from the Marines here at Camp Pendleton, said Col. Ryuji Toyota, commanding officer of the Western Army Infantry Regiment.

Exercise Iron Fist will be held in Southern California on Camp Pendleton and other military installations from Feb.6 to March 6. The exercise will include advanced marksmanship, amphibious reconnaissance, landing, and assault operations.