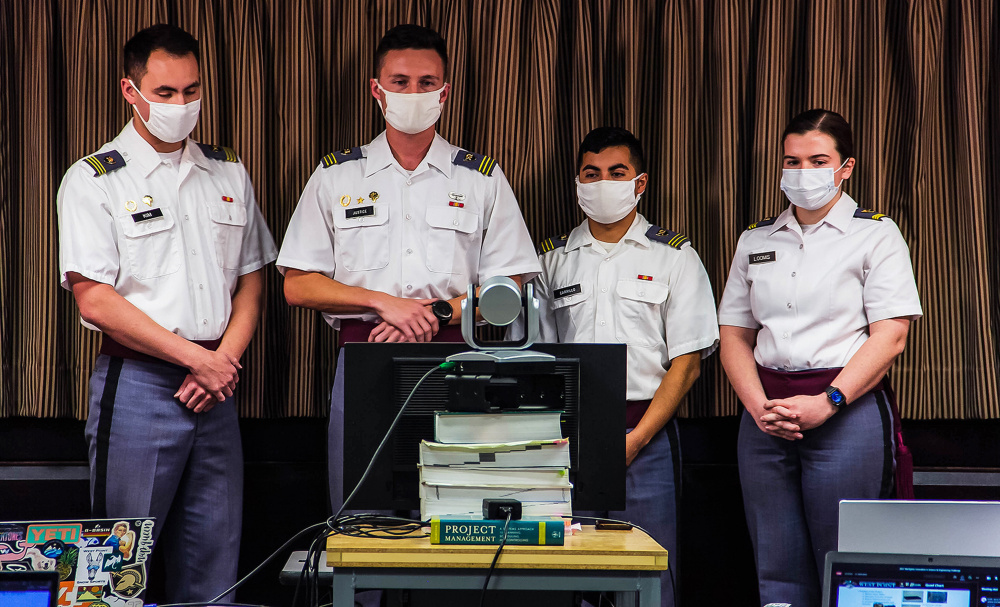 APRIL 30, 2021 – To discover breakthroughs in engineering and give way to innovation in the military, the Warfighter Innovation and Science and Engineering (WISE) Challenge is the competing grounds in which the U.S. Naval, Coast Guard and Air Force Academies showcased projects they developed within the realm of Science, Technology, Engineering and Math (STEM) throughout the academic year. As the U.S. Service Academies worked hard on their respective projects to win first prize, creating a distinct, pioneering technology that is service-specific or joint mission-related was their ultimate goal and was displayed on Monday at West Point.

Each service academy was tasked with developing three projects. Team Defender, out of USMA, worked on project B, which focused on designing enhanced, state of the art, underbody armor plates for armored fighting vehicles. Class of 2021 Cadets Courtney Loomis, Jesus Carrillo, Tyler Kim and Jarret Justice worked together as members of Team Defender to improve the plates intended to serve and protect Soldiers in the field, Loomis said.

“We’ve been working on this project since the beginning of this academic year and the hardest aspect of designing the project are the time constraints,” Carrillo said. “It’s hard in terms of how long it takes us to model a design. We have to model and then prepare the design for finite element analysis, which is a numbers system method used for solving a variety of equations that come up in engineering and mathematical models, and then we actually conduct the finite element analysis.”

While Project B is designed to protect the Soldier, it also reduces the cost of replacing and maintaining damaged vehicles. To achieve this, the team used SolidWorks, a 3-D modeling computer design program, and LS-DYNA, a simulation software used for various tests including safety, collision and explosive applications, Carrillo said.

“SolidWorks is an effective piece of 3-D computer aided design software. Basically, you create a 3-D image of what you want to make in real life on SolidWorks and it’s an overall good program,” Loomis said. “But because of how in-depth and complex our plate became, it took hours for it to process data accurately. Fundamentally, in the realm of engineering, if you create things in pieces, it’s called meshing. You make all of these small pieces one large body, and that’s one of the elements in this project that took a while.”

The 3-D model went through SolidWorks and once it was ready, it crossed over to a software called Cubit, a 3-D meshing software that prepares the model for analysis. The meshing software takes that one solid body and splits it up into really fine elements so that it can be analyzed and that process took roughly an hour-and-a-half to get done because of how complex the models became, Carrillo said.

From there, the models went into LS-DYNA, he added. Carrillo would apply the boundary conditions then the LS-DYNA would show him where the plate can’t move in the real world or the type of material in the plates. Carrillo said he would go through third-party programs and he would have to use and compile the right data needed for the model display. Afterward, he would submit the model for analysis, and because he tried to go as small as possible in terms of elements, it would take upwards of two-to-four hours for an analysis to run, and then the stressful part was using the LS-DYNA system.

“LS-DYNA didn’t tell you when it caught the data error early on. So there have been times where I’ve run a model and it finished. I’d be super excited just for it to tell me that it failed two minutes into the analysis,” Carrillo said. “However, it didn’t stop analyzing until it ran for four hours total. LS-DYNA is kind of obscure with how it reads data.”

When working on any complex project, the setbacks will follow, however, the team members synergized and worked as a unit to get the project off the ground, Loomis said.

“It was pretty easy working together only because, coming from mechanical and civil engineering, we have pretty similar organizational backgrounds when it comes to doing projects. We both have aspects of our job that involves making schedules communicating with people, so it was easy to do that,” Loomis said. “The big organizational problem that we ran into was due dates during the first semester. Because we’re a civil and mechanical engineering Capstone, we go off of mechanical engineering due dates, and sometimes, due to the nature of our project, it gets complicated submitting things at a certain time because either our testing is after the due date or it just doesn’t make sense with our type of project.”

For Loomis, Carrillo and the rest of the team, completing this project means much more than winning a prize in a competition. The idea that this project can possibly save many lives on the battlefield from Improvised Explosive Devices is one of the main driving factors that reinforce the magnitude of what they do at West Point.

“In September of 2019, I was sitting in my room when I got a phone call telling me that one of our close friends had been killed by an IED in Afghanistan,” Carrillo said. “So that’s what led to me doing that initial blast independent study over the summer. And then I had known about this (capstone) project as well. I was like that’s something I really want to do. If I can help play a role in something that could prevent this from happening again and while working on this project I was like, ‘Oh my God, this is awesome! This could save someone’s life, like we’re not just doing something for show. This is saving people’s lives.”