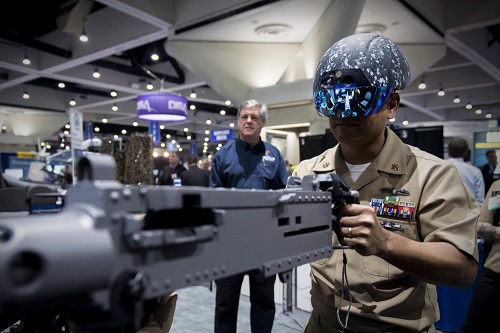 “HAMMER supports surface, subsurface, and air mission areas,” said Munoz. “It is designed to respond to unknown threats, so that we do not have to risk the lives of [explosive ordnance disposal] service members. Attendees of WEST were completely surprised that this type of technology even exists, especially because HAMMER does multiple missions autonomously, all while being powered by wind and solar technology. HAMMER is only one example of something innovative that exists now for our Sailors to use in the fleet.”

Munoz continued to explain his excitement for having the opportunity to showcase HAMMER at WEST this year.

“It was pretty amazing to be at WEST,” said Munoz. “Not only did I represent SPAWAR and the tremendous technology being developed, but I also represented the U.S. Navy Reserves. I am currently serving extended time on active duty and I am very proud to showcase how the Reserve community supports the information warfare mission.”

Vice Adm. Jan Tighe, N2N6 and director of naval intelligence, explained during an IW leadership panel how cyber and digital warfighting looks on a global scale.

“We have to operate differently than we have in the past,” said Tighe. “Operators of our information warfare systems need to integrate with the engineers and the designers, so that we can quickly find digital approaches to solve problems and move forward with solutions. Battlespace awareness, combined with integrated fires and assured command and control, will allow us to get to a better place and get the requirement right.”

Adm. John Richardson, chief of naval operations; Gen. Robert Neller, commandant of the U.S. Marine Corps; and Adm. Paul Zukunft, commandant of the Coast Guard, discussed the importance of working across all sea services in the information warfare domain during the closing luncheon of WEST 2017.

Richardson emphasized the important role information technologies have on the future of the fleet.

“The operating concepts that will allow us to continue to be competitive and win in the future [include] directed energies, unmanned technologies, artificial intelligence, and additive manufacturing,” said Richardson.

Richardson continued to stress communicating and coordinating across all services will provide necessary standards and consistency in warfighting environments.

“Providing the data standards and the communication standards — not only within the Navy, but with our sister services — [will allow us] to communicate, sense, and target together … that’s going to be a real force multiplier,” said Richardson.

Neller complemented Richardson’s comments by emphasizing information warfare is not a mission area restricted by a region or geographic location.

“All of us recognize that [information warfare and cyber are] not bounded geographically, even though the effect may be in a geographical area,” said Neller. “We are going to have to look closely at our training and the gear that we buy [so] we have enough commonality [across services] in order to communicate with each other and help defend each other. We are entering an area where joint training is as important, or more important, than it’s ever been.” 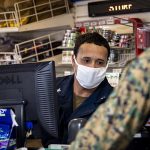