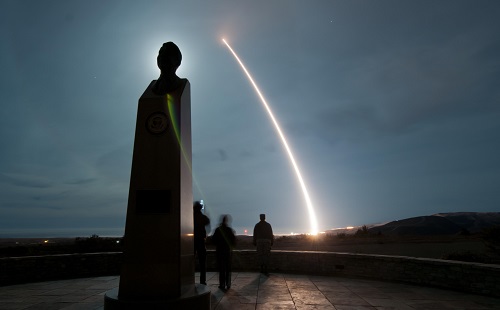 The Air Force has 150 launch facilities and 15 associated launch control centers “deployed in place” at each of three locations – Malmstrom Air Force Base, Montana; Minot AFB, North Dakota; and F.E. Warren AFB, Wyoming. The Airmen and ICBMs are on strategic alert around the clock to respond to orders from the President.

To comply with the New START (strategic arms reduction treaty) treaty, the U.S. is reducing the number of ICBMs that are on strategic alert from 450 to 400 leaving 50 launch facilities in reserve. This enables the Air Force to plan and execute a programmed depot maintenance effort for the first time in the life of the weapon system.

The launch facilities are underground silos, each with an 110-ton blast door for protection. All of the silos are networked together and controlled by missile combat crew members in underground blast-proof launch control centers.

This is the first time since 1971, when the Minuteman III first became operational at Minot AFB, that a portion of the Minuteman III fleet is being relieved of its combat assignment long enough to receive PDM in the same way aircraft have for decades.

“We’re taking advantage of that drawdown to restore vital hardness-critical systems to full mission capability – repair water leaks, mitigate corrosion, and generally posture the weapons system to remain safe, secure and reliable until the Ground Based Strategic Deterrent program (next generation ICBM) can achieve full mission capability in the mid-2030s,” said Col. Eric Jackson, the 309th MMXG commander. “These are all things we couldn’t do as effectively – or at all – while the launch facility was on strategic alert.”

The entire Minuteman III fleet will be inspected and restored during the course of an eight-year cycle. The maintenance process takes about 50 days for each launch facility or launch control center.

Within the launch facilities and launch control centers, there are a variety of components targeted to ensure the readiness and health of the site, including shock isolators, various launcher closure components, overpressure-protecting blast valves and blast doors, and environmental control system components, Young said.

As each of the 50 launch facilities are placed into the rotating reserve status for maintenance, the booster is removed from the launch facility by Airmen from the operating wing and returned to Hill AFB by 309th MMXG drivers, where they undergo programmed depot maintenance.

“As a result of the hard work and diligence of the depot and field maintainers, supported by government and contractor supply-chain partners and guided by exceptional engineers and program managers from the Air Force Nuclear Weapons Center, the nation can rest easy knowing the Minuteman III and associated systems will remain ready, alert and combat effective,” said Jackson.