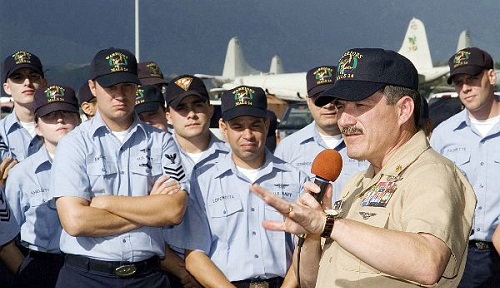 JUNE 3, 2016, SOUTH CHINA SEA (NNS) – The Navy’s iconic uniforms are steeped in tradition and practicality with roots as far back as the Continental navy and the 18th-century British navy.

Some of the earliest examples of a standard uniform are Hannibal’s Spanish infantry wearing a white tunic with purple trim in the second century B.C. — described in the 1979 Penguin translation of “Polybios” — or the Spartan hoplites of ancient Greece in red chitons, or cloaks, according to “The Spartan Hoplites’ Uniform” by Nikolaos Markoulakis.

The Navy had unique challenges in developing uniforms — logistics, salty environments, travel to different climates and long periods of time without resupply. It struggled to get funding following its formation and didn’t have an official enlisted uniform until 1817. Even then, its wear wasn’t heavily enforced since the Navy used the little money it had to expand and maintain its fledgling fleet.

According to Naval History and Heritage Command (NHHC), uniforms issued to enlisted Sailors reflected their surroundings and the work they did. Nearly every item in the enlisted wardrobe served a practical purpose. The Dixie cup was made from sail canvas and doubled as a flotation device, the black neckerchief began as a working rag and could be used as a battle dressing in emergencies, and heavy, wool bell-bottom pants could be quickly removed if a Sailor fell overboard to prevent drowning. Each one of these items served a purpose beyond being a uniform item.

Dungarees, a denim, bell-bottomed working uniform with a blue over shirt existed in the Navy from 1913 to 1999. At the time, they were well suited to naval environments due to their simple and durable design.

“When I first joined the working uniform was dungarees; that was by far my favorite uniform,” said Senior Chief Boatswain’s Mate Long Nguyen, from Tacoma, Washington. “Even back in the 1970s and 1980s [Sailors] would wade into water to work the lines so they’d roll [the pant legs] all the way to their knees.”

As fondly as many senior enlisted Sailors remember the dungarees, the Navy has a history of changing to adapt to new environments or to improve upon an old system. Several variations have been made leading to the Navy working uniform (NWU) and the flame resistant variant (FRV) coveralls Sailors wear today.

In 2010, the Navy adopted the current service uniform with black slacks and a pleated khaki top. Traditionally, khakis have distinguished chief petty officers and officers from junior enlisted Sailors. The Navy service uniform (NSU) that Sailors wear now was implemented to reduce the number of seasonal uniforms each Sailor needed to own.

“Logistically, it cuts down on cost and modernizes the sea bag,” said Lt. Cmdr. Kirk Engler, Stennis assistant supply officer, from Charleston, South Carolina. “I’m all about reducing the number of uniforms Sailors have to buy.”

The service dress uniform is going through some major changes as well. The female dress blue uniform is making the transition from suit to jumper to match their male counterparts.

“[The suit] distinguishes men from women, but [the jumper] will give us all a uniform look,” said Ship’s Serviceman 3rd Class Reema Dass, from Anaheim, California.

Officer and chief petty officer uniforms evolved alongside junior enlisted uniforms to adapt to a changing Navy. Originally, officer uniforms were meant to reflect their standing in society as aristocrats and gentlemen. An officer’s uniform was flashy and flamboyant compared to enlisted Sailors, with gold trim lace on the fringes, and plentiful metal epaulettes and buttons. Their role aboard ships was often administrative and managerial and not as physically rigorous as other seamen, according to NHHC.

Near the end of the 19th century and into the beginning of the 20th, society’s views and fashion changed — so did the Navy. The heavily adorned dress uniform officers wore made the transition to the modern business style suit and tie. As ships became more mechanized and required increasingly specialized skills, the officers’ service uniforms also changed with their new environment. In 1913 Navy aviators adopted the khaki service uniform from the Marine Corps to help conceal grease and stains, with the rest of the Navy following suit in 1941, said NHHC. This allowed officers to take a more hands-on approach without fear of ruining their uniforms.

On April 1, 1893, the Navy had grown large and complex enough to necessitate the creation of the chief petty officer to help manage increasingly specialized rates. A chief still worked closely with enlisted personnel, but also held managerial roles. That combination required them to replace their white Dixie cup covers with the hard-billed combination covers, have durable working uniforms, and service and dress uniforms similar to commissioned officers’ to reflect their status.

“We have that distinct uniform to set us apart once [we] make chief,” said Chief Machinist’s Mate Robert Purviance, from Buhl, Idaho. “Chiefs are unique because we get in, get dirty and turn wrenches still and show people what to do.”

According to the August, 1973 All Hands article “Coming Soon … The New Uniforms,” junior enlisted Sailors were also issued a business-style service dress blue uniform. Originally, the suit and tie received positive feedback and polled well among junior enlisted personnel, but over the following few years there was a growing sentiment to return to tradition. In 1980, the Navy began to reissue the nearly 200-year-old jumper, according to NHHC. The iconic crackerjacks and blue jacket Sailors were inseparable.

Today, the uniforms of both enlisted and commissioned Sailors have combined tradition and practicality to answer modern challenges and to remember their nautical roots.

Providing a ready force supporting security and stability in the Indo-Asia-Pacific, John C. Stennis is operating as part of the Great Green Fleet on a regularly scheduled 7th Fleet deployment.