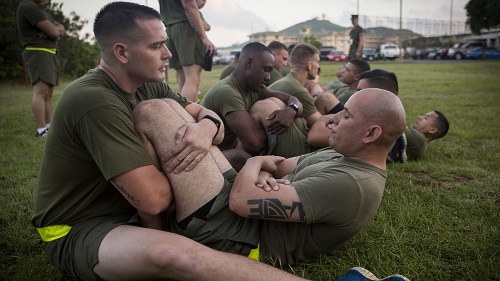 MARCH 20, 2017, MARINE CORPS BASE HAWAII – “America expects its Marine Corps to be the most ready when the Nation is least ready,” said General Robert B. Neller, 37th Commandant of the Marine Corps. “There are significant adjustments to the Physical Fitness Test and Combat Fitness Test scoring tables, requiring most Marines to demonstrate greater performance to meet the new minimum and maximum standards. We will monitor the effects of these adjustments for two years and then adjust if required to ensure our standards continue to contribute to the effectiveness of our force and enhance our ability to respond when our Nation calls.”

Implemented on Jan. 1 of this year, the new PFT standards raise the bar for physical fitness. Pull-ups, crunches and the 3-mile run remain in the core test, but now all Marines will have the option of doing pull-ups or push-ups, but a maximum score can only be reached by doing pull-ups.

A major change to the PFT is that Marines will be able to run it as many times as they want and the last score they receive will stay until the next test is conducted.

Cpl. Richard Flores, a training non-commissioned officer for Headquarters Bn., was responsible for scoring the Marines during the PFT.

“The PFT has been adjusted to reflect the changes for the 2017 fiscal year,” he said. “Some of the changes include more pull-ups for males, and females are required to do pull-ups versus the flexed arm hang. In addition, push-ups have been added as a replacement for doing pull-ups for less points. At age 46, Marines can opt out of the run and instead utilize a rowing machine.”

Flores said the PFT is a way for command leaders to assess the level of physical fitness for Marines. He also said with the new standards, expectations for Marines have been raised and are now expected to train even harder than before.

“Younger Marines have 20 seconds less to complete the 3-mile run [and their max requirement for pull-ups and crunches has increased,]” Flores said. “The new PFT will feel difficult for some Marines because it is more stringent. For the most part, I think the [new standards] do a good job of separating the most fit from the average.”

Cpl. Taylor Fallaw, an administrative specialist with Headquarters Bn., ran his PFT for practice to assess the new standards.

“It’s a lot harder, but I like that because it gives us something to strive for,” he said. “You now have more pull-ups, crunches and [less time to run the 3 miles,] which will only make you better down the line.”

Fallaw said the new standards are beneficial for Marines because it will make them more competitive amongst their peers and it reflects the changes happening throughout the Corps.

“We, as Marines, have to adjust to new changes,” he said “The PFT modifications keeps us as the most physically fit amongst the other branches and on a competitive edge on a global scale.”

Staff Sgt. Alexander Imlah, the maintenance chief for the base communications office, also ran the new PFT alongside his Marines.

“I was out there motivating our Marines during the PFT, because I wanted to support them in keeping their pace to get the best score possible,” he said. “The new physical fitness test is something to give us an edge and improve the standards already set by the Marine Corps.”

Imlah stated the updated standards require more effort and preparation. He said unprepared Marines will notice their scores drop because of the new scoring chart.

“There is no more just showing up to get a first class,” he said. “You can’t just whip out a first class, you have to be in better shape to get decent score. You have to train harder than the next guy.”