At a Pentagon news conference, Kirby said Hagel had an hour-long phone conversation with Shoygu.

“Secretary Hagel was clear, and he was firm: because Russian forces are in control of Crimea, they bear responsibility for what is happening there,” Kirby said. “He also pressed Minister Shoygu to explain Russian intentions with respect to forces they have aligned near Ukraine’s eastern and southern borders.”

The secretary reiterated the U.S. position that Russia should immediately work to de-escalate the tension and to restore Ukrainian territorial integrity, the admiral said.

The call was “direct,” the press secretary said. Hagel was “very direct about his concerns about the troops that are on the Russian side of the border, … and he wanted a better accounting for what that was all about,” he added.

Shoygu assured Hagel that Russian troops arrayed on the border “are there to conduct exercises only, that they have no intention of crossing the border into Ukraine, and that they would take no aggressive action,” Kirby said. “The two leaders agreed to keep the dialogue open.”

Thousands of Russian troops are along the border with Ukraine. Kirby would not go into specifics, saying that those wanting more information were welcome to get that information from the Russian Defense Ministry. “They should be able to account for the troops they have, and particularly because they are exercises,” he said.

Kirby said U.S. officials are working through Ukrainian requests for assistance. “The focus of that review is on the nonlethal side of things, but it is very much still an active issue under consideration,” he said.

The United States has agreed to provide packaged meals to Ukraine, as well as some medical supplies and uniforms. 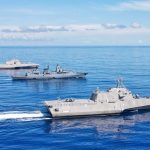