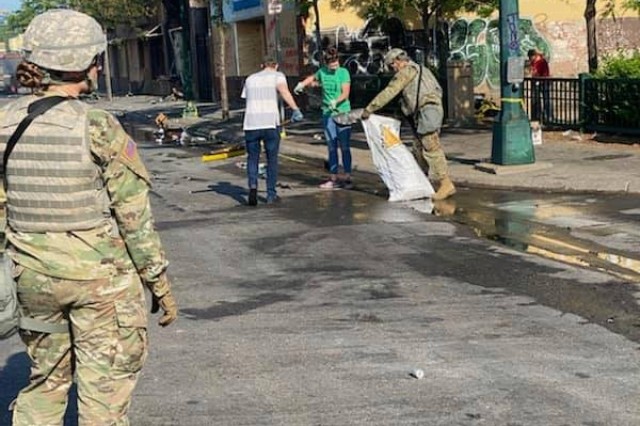 JUNE 1, 2020 – As of Monday morning, National Guard Soldiers and Airmen were activated in 23 states and the District of Columbia in response to civil disturbances, bringing the total number of Guard members on duty in support of their governors to nearly 62,000.

This number represents activations for civil unrest, COVID-19 response, as well as state-specific disasters such as wildfires, flooding and other natural disasters.

The civil unrest response mission is expected to grow as governors assess the fluid situations in their states and call on the National Guard to assist.

“The hardest mission we do is responding in times of civil unrest,” said Air Force Gen. Joseph Lengyel, chief of the National Guard Bureau.

The activation of Guard members in response to civil unrest has unfolded in multiple cities in the wake of the death of George Floyd in Minneapolis.

Guard members are to perform a variety of mission sets including traffic control, support to law enforcement, transportation and communication support. They’ve also been called upon to assist with extinguishing fires burning as a result of the unrest.

The overall mission of Guard members is to assist local authorities and ensure safety.

“We’re here to help and assist local authorities,” said Lengyel. “Our troops are here to protect life and property, and preserve peace, order and public safety.”

Those Guard members called up are in a state active duty status and remain under the command and control of their respective governors, said Lengyel, adding those responding will continue to adhere to COVID-19 prevention measures.

“Governors have used Guard members many times during response efforts to support local and state law enforcement in a wide range of capacities, to include assisting in upholding the rule of law.” said Lengyel. “While conditions may change, the National Guard’s ability to respond is constant.”