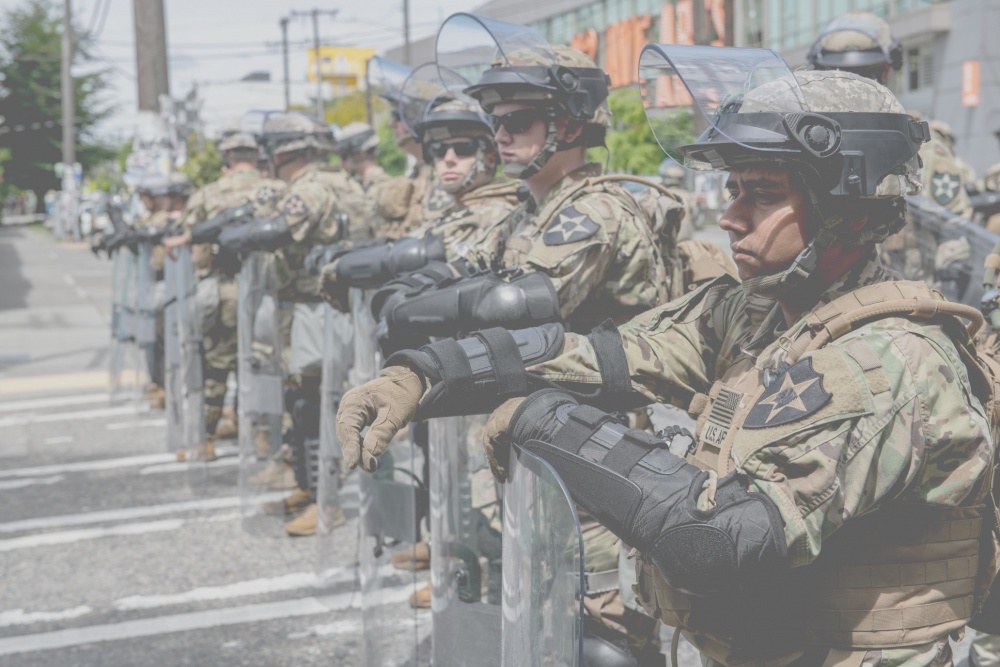 JUNE 19, 2020 – As the response to COVID-19 became more manageable, another crisis developed following the death of George Floyd while in police custody in Minneapolis, MN.

Calling for the end to police brutality and racism, thousands of peaceful protestors filled the streets across the nation. When the sun went down, however – messages of hope and change devolved into chaos and destruction.

On Saturday, May 30, 75 Washington National Guardsmen were activated to support the Seattle Police Department when peaceful protests turned violent and organized criminals began looting downtown retailers and torching police vehicles. The following day, the cities of Bellevue and Spokane requested Guard assistance and Gov. Jay Inslee authorized the full use of the Washington National Guard.

“So as this developed early in the week, it went from a position of sending out airmen and soldiers already trained, to, ‘we’re going to need a lot more’ than these troops,” said Brig. Gen. Gent Welsh, commander of the Washington Air National Guard. “All of this was developing daily, and then shifting hourly as the mission just kept getting more and more complex.”

On June 3, Brig. Gen. Dan Dent, the commanding general, called for a full activation of the Washington Army National Guard to ensure enough soldiers were available to support the pending unrest across the state. Those soldiers not already on orders to support the COVID-19 response or civil disturbances were to attend Military Assistance for Civil Disturbances (MACDIS) training.

“We decided to activate the entire Washington Army National Guard, probably the first time since the eruption of Mt. St. Helens,” said Dent. “We had the goal of training up to 1,000 Guardsmen on MACDIS and due to the unprecedented nature of the environment we are in it was the only way we could accomplish this goal.”

As Army Guardsmen across the state were activated, more than 300 Airmen from various Air Force career fields were trained to be part of the total force.

“This agency has spent years working at becoming more joint,” said Welsh, explaining how the Army and Air National Guard have worked to become more integrated on critical missions. “We had done some of this with the COVID-19 response, but this civic disorder developed so quickly.”

By June 5th, more than 1,100 Guardsmen were put on State Active Duty to support local law enforcement agencies. Guardsmen were stationed throughout King, Pierce and Spokane counties as well as on Camp Murray in case more were needed. While most of the events were relatively peaceful, Guardsmen reported having rocks and other objects thrown at them.

“We successfully trained more than 1,500 Guardsmen between the Army and the Air and our Guardsmen maintained professionalism and their military bearing in a tough situation,” said Maj. Gen. Bret Daugherty, the adjutant general.

Sgt. Maj. Travis Wise was one of the Guardsmen on the lines in Seattle. He was responsible for ensuring soldiers and airmen were taken care of while reminding them of their important role in protecting infrastructure.

“Our soldiers and airmen were prepared for whatever would come, be it peaceful or violent,” said Wise. “We reminded them that these people are our neighbors, family and friends. We are here serving so they can freely protest, we were doing the right thing.”

Wise gave a lot of credit to the leaders on the line for reminding soldiers and airmen each day about the importance of their role. He also said the chaplains played a pivotal role in defusing some potentially bad situations.

“We had one chaplain that not only walked the line checking on our folks, he also would stop and have conversations with the protesters in the crowd, making sure they were ok, providing any assistance as needed and giving them a chance to talk and ask questions about our role,” Wise said.

On June 10th Guardsmen began to demobilize off the mission, but the importance of being prepared for future civil unrest missions is not lost on the leadership.

“It had been 20 years since we last were called to support a civil unrest mission. Let’s hope it is at least another 20 years before this happens again, but we are ready when and if needed,” said Daugherty.