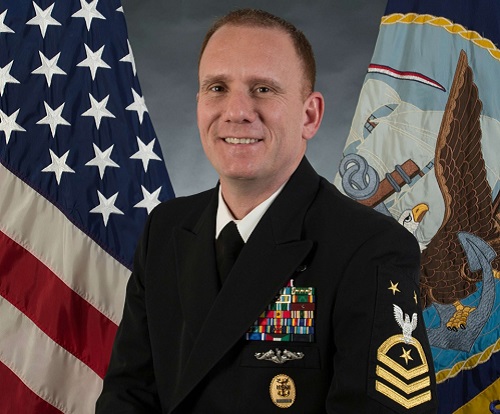 “I am always honored to participate in a Sailor’s reenlistment, but today is a true privilege,” Foggo said. “Fleet Master Chief Giordano has dedicated his entire adult life to serving his country and has been wearing a Navy uniform since 1989. It is fitting that for his final reenlistment, [he] invited other CNE-CNA (Commander, U.S. Naval Forces Europe-Africa) Sailors to join him and commit to supporting the Constitution of the United States once more.”

Giordano, a native of Baltimore, enlisted in the Navy in 1989. He will continue his service in the Navy as the 14th Master Chief Petty Officer of the Navy (MCPON) after current MCPON Mike Stevens retires Sept. 2.

“I am honored to stand beside the two great Sailors, raise our right hands together, and continue to have the opportunity to serve our great nation and our Navy,” Giordano said.

Bozen enlisted in the Navy in 2009, reenlisted for six years and plans to make the Navy a career for at least 20 years. Her next command will be Naval Special Warfare Group 1 Mobile Communication Detachment at Coronado, California.

“I’m looking forward to the higher operational tempo there, where I’ll be more involved with the command mission,” Bozen said.

“I’m good at my job and enjoy it,” Wisher said. “Being deployed, seeing port visits, and living and working with your crew — I think serving aboard a ship is something special most people won’t get a chance at.”

U.S. 6th Fleet headquartered in Naples, Italy, conducts the full spectrum of joint and naval operations, often in concert with allied, joint, and interagency partners in order to advance U.S. national interests and security and stability in Europe and Africa.