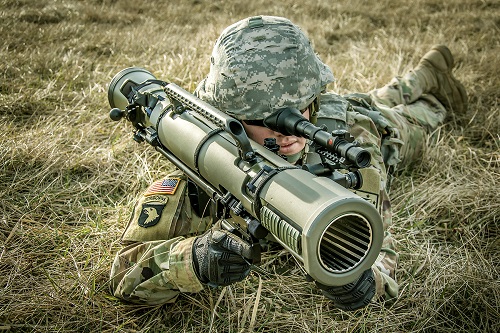 OCTOBER 13, 2016, ABERDEEN PROVING GROUND, Md. – The U.S. Army is testing significant improvements to a shoulder-fired weapon used by Soldiers and Special Operations Forces as part of a foreign technology program.

When testing and qualifications are completed in spring 2017, upon type classification scheduled for fall 2017, the system will be available for procurement to all Department of Defense services. The M3E1 fires a high-explosive round to engage light-armored vehicles, bunkers and soft structures. The upgraded weapon is able to fire the existing suite of MAAWS ammunition.

To assist in the project with funding and expertise, the M3E1 team turned to the Army Foreign Comparative Testing Program, said William “Randy” Everett, FCT project manager. The program’s mission is to find and evaluate solutions to meet the operational needs of American Service members — regardless of the origin of that technology.

“We wouldn’t have been able to do the project without the support and funding provided by OSD FCT office,” Everett said.

The Army Research, Development and Engineering Command’s International Cooperation and Exchange Office manages the FCT program for the Army.

“The team combined an improved weapons system with cost savings,” Everett said. “They traveled to Sweden so they could observe and validate the vendor’s testing instead of duplicating it back in the U.S. It was an innovative solution that saved more than $300,000.”

Bober said the upgrades will also include a shot counter. For safety reasons, a weapon should not be fired more than its specified limit of rounds.

“This will give Soldiers better use of the system,” she said. “Right now the Soldier is manually recording the number of rounds fired in a notebook provided with each weapon. It will make everything easier and provide traceability. The system will last longer when we know how many rounds go through each weapon.”

Under the current system, if a Service member does not track each round fired, the M3 must be half-lifed because an accurate count cannot be guaranteed. For example, if a weapon is qualified for 1,000 rounds, a half-life would cut the remaining use to 500.