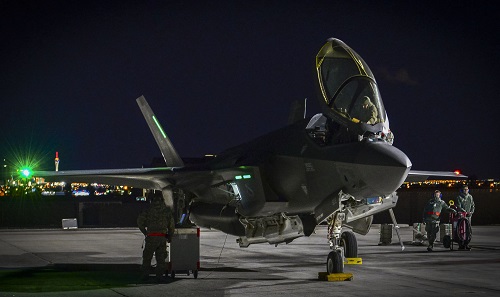 JANUARY 31, 2017, NELLIS AIR FORCE BASE, Nev. (AFNS) – The debut of the F-35A Lightning II at Red Flag has afforded the pilots and maintainers of the aircraft a chance to be a part of the Air Force’s premier air-to-air combat training exercise. For Airmen involved with the F-35, Red Flag 17-1 provides a unique type of training that prepares them to be fully mission ready.

“It’s been great coming here and doing something that some of us haven’t necessarily done before,” said Senior Airman John Girtman, an F-35A avionics systems specialist assigned to the 388th Aircraft Maintenance Squadron at Hill Air Force Base, Utah. “It gives us the ability to exercise our strength. Being able to work in an environment like Red Flag and seeing all of our training and hard work from back home come to fruition is extremely beneficial.”

A major part of the success so far of the F-35 aircrew can be contributed to the planning and training that went into getting prepared for Red Flag 17-1.

“Before we came out to the exercise we sat down and came up with a game plan as to what we may encounter or any issues we might face and how we can overcome those challenges,” said Staff Sgt. Brandon Bailey, a 388th AMXS crew chief.

“Now that we are here, the challenges we face during Red Flag helps us see what kind of challenges we might be faced with in a deployed environment and how we can overcome those,” Bailey said. “The things we learn during this exercise will allow us to progress and get better.”

Red Flag exercises are fast-paced and provide aircrews the experience of multiple, intensive air combat sorties in the safety of a training environment.

“Here at Red Flag there is a great sense of urgency,” said Airman 1st Class Anhre Bourgeois, a 388th AMXS F-35A weapons troop. “We are always on the go. If it ever came to a real world contingency I think it will be the same thing. Just constantly on the go to get the job done and the jets up in the air. Red Flag really prepares me for that.”

The F-35’s combined lethality and survivability make it the platform of choice for operations in a highly-contested threat environment. The F-35 will be the backbone of future joint and combined air operations, enabling critical interoperability.

“It’s an eye opening experience to be out here,” Bourgeois said. “It’s not every day that you get to work on an aircraft as smart as the F-35A. It’s definitely taught me a lot and I’m very humbled to be working on an aircraft like this.”

This is the first deployment to Red Flag for the F-35A and the first large movement since the Air Force declared the jet combat ready in August 2016.

Lt. Col. George Watkins, the 34th Fighter Squadron commander, said, “It is exciting to integrate the newest operational fighter squadron and the newly initial operational capability F-35A with all the other experienced warfighter including two of our partner nations. The professional aggressors are giving us great training, but enemy is no match for our integrated fourth- and fifth-generation Air Force.” 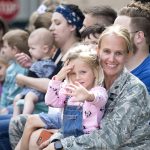