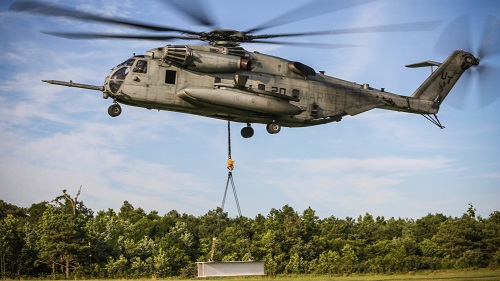 “The squadron’s mindset is focused on training new crew chiefs and pilots in order to maintain a mission-ready mindset,” said Lance Cpl. Christopher Angelo, a crew chief with the unit. “The pace here at HMHT-302 is that of a deploying squadron and we constantly maintain the aircraft. We make sure that all birds are flight-ready and mission-capable at all times.”

Angelo explained the CH-53E Super Stallion’s mission is to support ground troops, and how external lifts contribute to their mission readiness. External lifts increase the amount of gear and supplies the CH-53E can carry by rigging cargo underneath the aircraft.

“They applied what they have learned from prior flights, simulated flights and many classroom hours to get to where they are now,” said Maj. Jonathan Williamson, a logistics officer and pilot with the unit. “They need to operate the CH-53E while conducting a precision hover about 10 feet off the ground and then take-off with a significantly heavier load than they are used to.”

Williamson explained how CH-53E was ground-guided to a large metal beam with two ropes attached, simulating the cargo for transportation. The external load is attached to a rig in the aircraft by either single or double point connectors that hang through the floor of the craft.

If the cargo being transported is unbalanced, the helicopter can improve the stability of the cargo by distributing the weight across two connectors. The pilots conducted several lifts to ensure confidence in their abilities to safely maneuver their load around the Marines on the ground.

The Marines attaching the cargo utilized keen situational awareness to ensure they were following all safety procedures while working under the helicopter.

Landing support specialist on the ground each held a specific role during the lifts. One Marine grounded the static electricity from the CH-53E, two Marines attached the cargo, and another two helped guide and ensure safety measures were in place.

“If someone were to touch the chopper before it is grounded, they would receive a potentially fatal shock from the built up static electricity,” said Angelo. “On top of that, the pilots need to be very careful because they can’t see the Marines underneath the aircraft. The Marines rely on verbal and visual responses from the landing support specialist guiding them to let them know if they are too high, too far left and when it’s safe to take-off with the load.”

The CH-53E is capable of carrying more than 70,000 pounds in total weight, making it an asset to the Marine Corps as it grants Marines on forward operating bases the ability to have supplies or artillery equipment delivered to their positions using its heavy lifting capabilities.