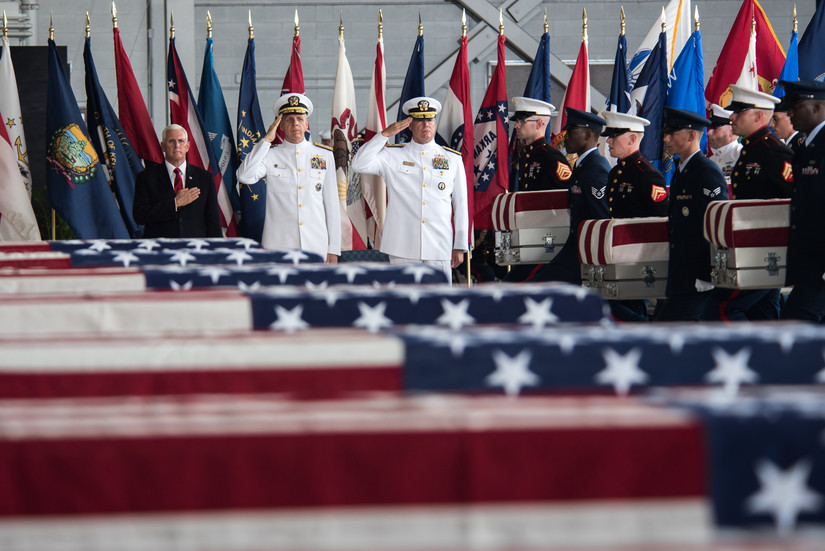 AUGUST 16, 2018 – The Department of Defense POW/MIA Accounting Agency provided an update today on the status of identifying the remains transferred in July to the United States from North Korea.

“We are guardedly optimistic the 1 August repatriation is the first tangible action of others, with which we will be able to account for more of our missing from the Korean War,” the director of DPAA, Kelly McKeague, said at today’s White House media briefing.

The August repatriation and homecoming was a “poignant manifestation” of the commitment secured by President Donald J. Trump and the pledge by North Korean leader Kim Jong Un at their June summit in Singapore, he said.

McKeague highlighted the return of a dog tag of Army medic Master Sgt. Charles H. McDaniel. “It was a sole personal effect returned by the North Koreans,” he said, adding that the return of the remains is the first step toward talks to resume joint field recovery operations. The dog tag was returned to McDaniel’s sons.

Joint recovery operations in North Korea were suspended in 2005 due to security concerns by then-President George W. Bush.

Humanitarian Endeavor
McKeague described the recovery effort as a humanitarian endeavor and said he is encouraged that the June summit and North Korea’s reaffirmation to resume recovery operations may lead to further cooperation. He said the contacts are being treated as military-to-military contacts.

The time it will take to match the remains to a service member will be DNA-intensive and take months or years, DPAA lab director John Byrd said.

“At no time did we expect there to be one body, one box. Nor did the North Koreans try to pitch it that way to us when we were in Osan,” Byrd said, citing as an example the return of remains over five years the 1990s.

“Out of those 208 boxes over those five years, we estimated, after DNA sampling, 400 individuals. Now from that, 200 were Americans,” he said.

Initial inspections indicate the recently returned remains are in moderate to poor condition and do not contain any remains of animals, Byrd said.

Sacred Obligation to Recover Missing Americans
There are 7,700 Americans missing from the Korean War, McKeague said.

The DPAA mission is to search for, find and account for missing Defense Department personnel from World War II, the Korean War, the Vietnam War, the Cold War, the Gulf War and other recent conflicts. More than 82,000 Americans remain missing from those conflicts, with 34,000 believed to be recoverable, according to DPAA.

“The fact that the United States of America vigorously pursues the fullest possible accounting of our missing reflects our values as a nation,” McKeague said. “The sacred obligation, if not moral imperative, remains a high priority for the Department of Defense.”