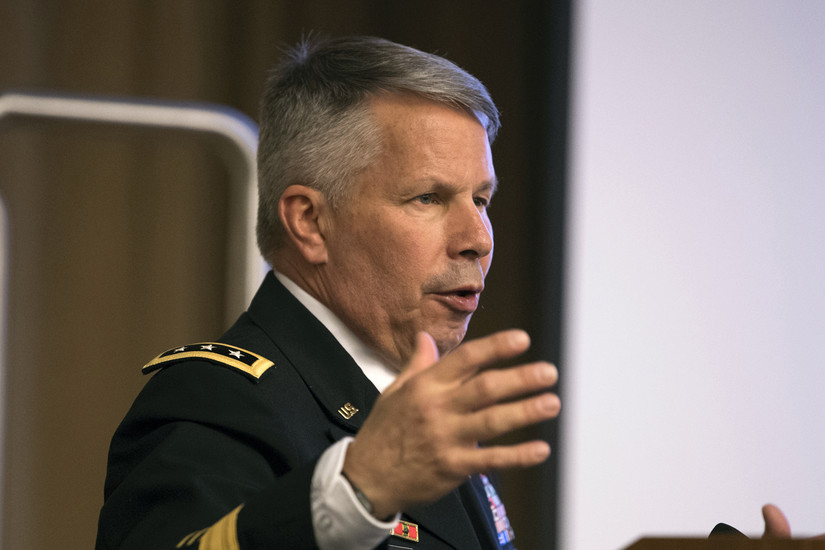 FEBRUARY 22, 2018, Washington D.C. – From cutting-edge developments in medicine and technology to infrastructure projects in the U.S. and around the globe, Defense Department engineers are innovative and deliver solutions, officials said at the 13th Annual Engineers Week event at the Pentagon today.

The long list of notable accomplishments from DoD engineers includes the mass production of penicillin and the development of the Global Positioning System, Michael D. Griffin, the undersecretary of defense for research and engineering, noted.

“Every time an engineer or a team of engineers create a new device, a new system, a new invention, a new design, that’s a design for something which has never existed before in the history of the universe,” Griffin said.

He described engineering as the “most rewarding occupation in the world.”

Other examples of innovations from DoD engineers include the internet, the microwave, the EpiPen, duct tape and digital photography, Kristen Baldwin, acting deputy assistant secretary of defense for systems engineering, pointed out.

The engineers, she said, are continually seeking to incorporate ideas and leverage new technologies to support of the warfighter and the priorities of Defense Secretary James N. Mattis.

Thinking Outside the Box
Army Lt. Gen. Todd Semonite, chief of engineers and commanding general of the U.S. Army Corps of Engineers, said engineers must continually think outside the box to deliver solutions for the nation’s toughest challenges.

“We’ve got to learn every single thing we do and try to figure out ‘How do we push the envelope? How do we continue to keep going?’” he said.

The focus, Semonite said, remains on how to support the commander’s or senior leader’s intent, while giving the taxpayers the best value for their money. He highlighted numerous efforts of the Army Corps of Engineers, such as the Mosul dam in Iraq; missile defense projects; cutting-edge schools and world-class hospitals; waterway projects; infrastructure post-hurricane projects in Texas, Florida and Puerto Rico; support for the combatant commanders; and structures in Iraq and Afghanistan.

The U.S. Army Corps of Engineers has about 37,000 civilians and soldiers delivering engineering services to customers in more than 130 countries, he pointed out.

Inspiring the Next Generation
The speakers stressed the importance of inspiring the next generation.

The Defense Department needs to be one or two steps ahead of the private sector to recruit and retain the best in the field, Griffin said. “When we are, not only do people want to come here, but our people want to be part of that,” he said. “When you’re doing boring stuff, you should not be surprised if people are bored.”

Baldwin highlighted a scholarship program for America’s future scientists and engineers – the Science, Mathematics and Research for Transformation, or SMART, program – to engage and inspire the next generation.

The SMART program offers scholarships to undergraduate, master’s and doctoral students who have demonstrated ability and special aptitude for excelling in the science, technology, engineering and mathematics fields.

Awards can be made during any phase of a scholar’s education and vary in length from one to five years. The service commitment is one year of DoD employment for each academic year of SMART funding, she pointed out.

John DiCecco from the Naval Undersea Warfare Center Division, Newport Undersea Warfare Weapons, Vehicles, and Defensive Systems Department, is the 2018 first quarter recipient of the Department of Defense Science, Technology, Engineering, and Mathematics Advocate of the Quarter Award. DiCecco was recognized for his efforts in STEM education and outreach programs and activities. His leadership and mentorship efforts are reflected in his commitments to Newport Division-sponsored outreach and in the greater Naval Sea Systems Command community.

Richard Sciotti from the U.S. Army Medical Research and Materiel Command is the 2018 first quarter recipient of the DoD Laboratory Scientist of the Quarter award. Sciotti is a senior scientist and chief of medicinal chemistry for experimental therapeutics, Military Malaria Research Program, Walter Reed Army Institute of Research. He is recognized as a leader in malaria prophylaxis and small molecule antibiotic developed for the DoD.