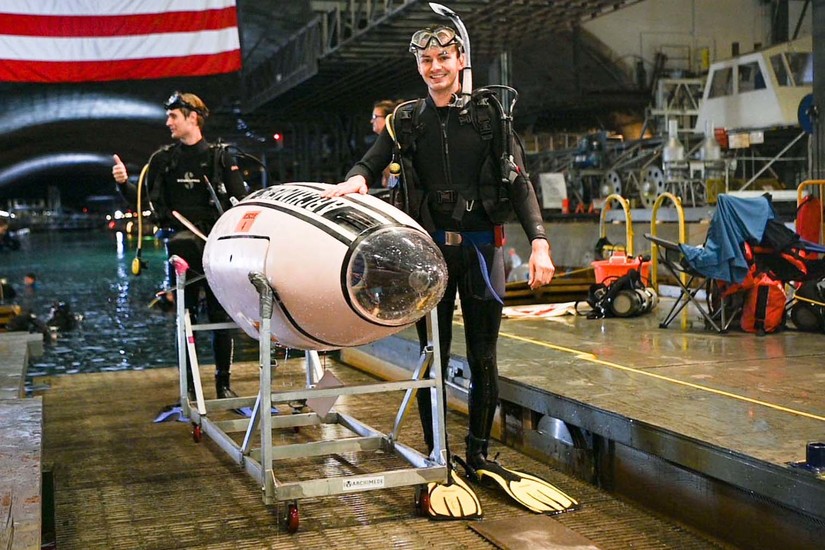 JULY 30, 2019 – Science, technology, engineering and mathematics, or STEM, skills are vital to maintaining a skilled and ready force. The Defense Department has demonstrated its commitment to STEM through a number of learning opportunities for students from elementary school through graduate school to help inspire the next generation of service members.

One way DOD helps to foster STEM curiosity and learning is through its participation in the International Submarine Races.

More than 400 university and high school participants from around the world converged on Naval Surface Warfare Center Carderock Division in Bethesda, Maryland, June 23-28 to show off their feats of engineering during the biennial races. The unique competition strengthens the students’ knowledge of hydrodynamic design, propulsion and systems engineering.

More than 20 teams raced human-powered submarines they designed and built. The teams must lower the submarines into the water and get inside the vessels once they’ve been submerged. It can be a tricky process, so Navy sailors serve as the students’ primary source of diving and hyperbaric operational guidance by stationing themselves along the basin to keep the students safe.

Charles Behrle, president of the Foundation for Underwater Research and Education, said the competition is the “ultimate STEM event for people interested in naval architecture, marine and electrical engineering.” The event offers a chance for the Navy to show the participants what they have to offer.

“The 400 students are getting exposure not only to the facilities, but to the men and women who gladly offer them advice.” The sailors explain what careers are available to them, Behrle added. “For us to remain a world-class Navy,” he said, “we need world-class people.”

Human-powered submarine races were first held in 1989 in Florida, with 19 teams from various universities and groups. Competitors now race their subs in Carderock’s 3,200-foot long basin. When it’s not home to the submarine races, the site is normally used for classified submarine and surface-ship testing.

Matthew Criss, a rising senior at Virginia Tech, said competing in the International Submarine Races helps with the team’s critical thinking. The races also give teams a long-term goal to achieve.

Criss said the ISR event is two years of effort that really pushes the participating teams.

“STEM learning is really important. There’s a lot of critical thinking that’s involved, and it really forces you to realize what you’re doing and learn from it,” Criss said.

If a sub crosses the finish line, it has to be completely rebuilt inside before it can compete in the next race. This gives the teams the opportunity to design and build a new vessel.

Sam Middleton, an engineering student from the University of Southampton in England, said what she’s learned underwater during the races will help in her future career above ground, as a wind turbine designer.

“The skills that you get from [this] are really valuable,” she said. “When you design something, it can be designed perfectly on paper, but you actually have to think about stuff like how are you going to make something and how it’s actually going to all fit together.”

According to the DOD’s STEM office, some 80% of careers will require STEM skills in the next decade. DOD currently employs nearly half of the scientists and engineers in the federal government. Events like the ISR help to energize young people around STEM careers.

View more highlights from the races on the Carderock Flickr page.