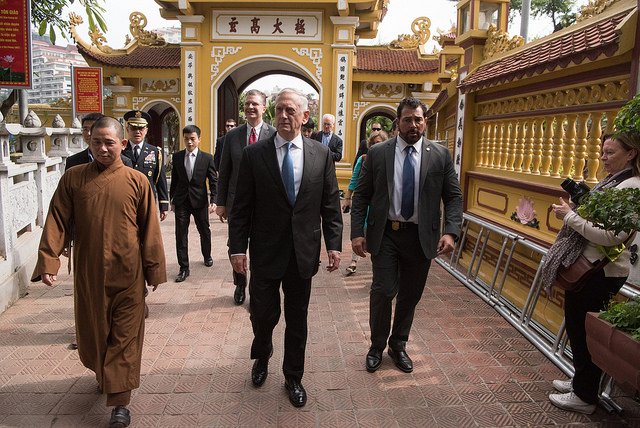 JANUARY 26, 2018, Washington D.C. – The United States and Vietnam are “like-minded partners” that have a forward-looking relationship, Defense Secretary James N. Mattis said yesterday as he concluded a visit to the Vietnamese capital of Hanoi.

Mattis and Vietnamese Defense Minister Ngo Xuan Lich met yesterday to discuss regional security issues. The secretary said he also met with the president of Vietnam and the general secretary of the Communist Party there.

“This is the normal coordination, collaboration, consultation, as we work out a relationship with Vietnam, and leaving things in the past as our starting point,” Mattis told reporters traveling with him en route to Honolulu after leaving Vietnam.

He said the United States and Vietnam share values based on mutual respect and common interests, including freedom of navigation, respect for international law, and recognition of national sovereignty.

ENHANCING U.S.-VIETNAM DEFENSE COOPERATION
At the meeting, the two leaders committed to enhance defense cooperation based on a three-year plan of action agreed upon in October, with a focus on maritime security, humanitarian assistance and disaster relief, as well as peacekeeping operations, White said.

Mattis and Lich also noted recent progress on the Cooperative Humanitarian and Medical Storage Initiative and robust Coast Guard cooperation, including the arrival of a former U.S. Coast Guard cutter in Vietnam in December, she added.

Mattis highlighted the 2018 National Defense Strategy, which reaffirms the U.S. commitment to work with partners such as Vietnam to sustain the rules-based order in a free and open Indo-Pacific region, White said.

Mattis also expressed appreciation for Vietnam’s close support to the Defense POW/MIA Accounting Agency mission in Hanoi, White said, as it works to recover U.S. personnel missing from the war. The secretary is committed to working with Vietnam to address remaining legacy of war issues, White added.

The U.S. and South Korea have an “ironclad alliance,” Mattis said. Discussions are to include denuclearization efforts on the Korean Peninsula, in light of three unanimous United Nations Security Council resolutions on North Korea, he said.

The secretary highlighted diplomatic efforts on the North Korean issue, noting he was recently in Vancouver, British Columbia, for the Foreign Ministers’ Meeting on Security and Stability of the Korean Peninsula.

“We’ll continue to hold the line and provide credible military options so the diplomats can speak from a position of strength and persuasion,” he said.