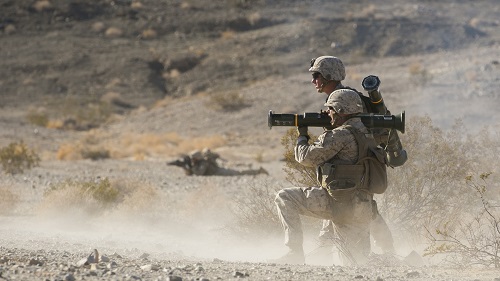 JULY 28, 2016, MARINE CORPS AIR GROUND COMBAT CENTER TWENTYNINE PALMS, Calif. – As Marines advance on the range, the night is silent. Breaking the serenity, an instructor’s shout incites a fire team to lay suppressive fire on a notional enemy and then locate the nearest protective cover. As they find their bearings, they begin to advance, conducting fire and maneuver tactics in pairs.

This buddy-rushing exercise was only a fraction of what Marines from 3rd Battalion, 4th Marines, 7th Marine Regiment, executed during the Tactical Small-Unit Leadership Course at the Combat Center, July 7 through July 22, 2016.

The course began with classroom-based instruction where Marines learned about different weapons and optics systems, fire team skills and other tactics, techniques and procedures.

After that, students went to Forward Operating Base 1 in the Combat Center’s training area. There, the Marines conducted Military Operations on Urban Terrain exercises and worked on their leadership within a simulated urban environment.

“MOUT can be a true test to any team leader’s tactical proficiency and ability to communicate under quick scenarios,” said Cpl. Shane Martin, team leader, Company L, 3/4. “The more we practice this now, the better prepared we will be when situations arise in the future.”

After MOUT training, instructors took the squads on patrolling exercises where they practiced the cycle of the infantryman, squad patrolling in the offense and defense.

“Patrolling is one of the many foundations of an infantryman,” said Cpl. Reid Ohala, team leader, Company K, 3/4. “Learning to practice patrolling not only through the eyes of a rifleman, but a team leader, is definitely something that TSULC showed me.”

The final portion of the course took place in the Prospect training area where Marines conducted exercises such as fire and maneuver, buddy rushing and unknown distance shooting during different times of the day. The culminating event of TSULC was an internally-supported squad attack, in which the squad leader is put in charge, with three other team leaders taking charge of the other Marines.

“The training is very important when you’re thinking about small unit leadership,” said Sgt. Maj. Charles F. McDew, battalion sergeant major, 3/4. “We are building the cohesion and confidence needed to perform the tasks assigned to them without someone of a higher rank controlling their every movement.”

This training will benefit not only the Marines who participated in the course, but the Marines they lead, making a more effective ‘Darkside.’