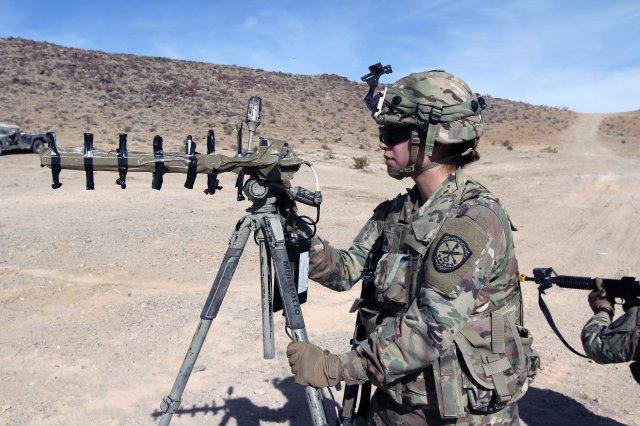 NOVEMBER 19, 2018 – With the cyber domain expected to see constant battles in future warfare, Army leaders say new efforts are underway to strengthen the Army’s cyber force so it can defend forward against adversaries.

One aspect being bolstered is electronic warfare. The Army has now placed 29-series EW Soldiers into cyber’s 17-series career field as the service zeroes in on it.

“We have really focused on the next phase of development and that’s in our electronic warfare force,” said Brig. Gen. Jennifer Buckner, director of cyber in the Army’s G-3/5/7 office.

The goal is to combine EW assets along with cyber and information operations capabilities across all echelons of the Army.

The Multi-Domain Task Force, which has experimented with those capabilities in the Pacific, will continue to serve as a proving ground. This fiscal year, there are plans to stand up an EW platoon within I Corps to support the U.S. Army Pacific-led task force.

“That will be kind of the first test case for our electronic warfare organizations,” Buckner said Thursday during an interview at the International Cyber Conference on Cyber Conflict U.S., or CyCon U.S. “We’re going to experiment with the capabilities as much as we’re going to also try to validate force design that we’ve put on paper.”

Cyber and electromagnetic activity cells, or CEMA, will even be built up to advise commanders at the brigade, division, corps and Army Service Component Command levels.

“We’ll have an operational force and we’ll also have the planning and staff element that would help employ them,” Buckner said.

An additional piece, she added, is the Cyber Warfare Support Battalion. The battalion will grow over the next five to six years and include about 600 personnel in expeditionary cyber teams.

The idea behind it is “that we can tailor force packages, if you will, to downward reinforce to tactical levels,” she said.

Personnel numbers in the other efforts are still being worked on and will depend on the Army’s end strength and growth, she added.

Throughout the ROTC community, there are about 50 cadets who commission into cyber each year.

At the U.S. Military Academy, many cadets have also expressed interest to commission into cyber. As of right now, though, only 26 cadets at the academy can do so.

“We got a large amount of interest [but] don’t quite have the demand side right yet from the Army,” said Col. Andrew Hall, director of the Army Cyber Institute, which is located at West Point, New York.

Cadets who branch into military intelligence or signal will benefit the cyber force, too.

“That’s also a huge win for us because those are our primary partners in this fight,” Buckner said.

Last year, the Army Cyber Command began the Cyber Direct Commissioning Program in an effort to entice cyber experts in the civilian world to suit up in an Army uniform.

The program received around 250 applicants and at least two of them — former enlisted Soldiers — were commissioned as first lieutenants in May.

Those who qualify under the program have the opportunity to join the Army as first lieutenant, with the possibility of a higher rank. Up to $65,000 in student loan repayment over the course of an officer’s initial three-year term is also on the table to attract desired applicants.

The program is currently searching for its first applicant to be automatically promoted to colonel.

“Right now, we have a system where generally an 18-year-old is the target,” Hall said of Army recruiting. “But we’re saying what happens if someone wakes up at 37 and decides that they want to serve? What happens if that person has had an entire portfolio of work where they could step in … as a battalion commander?”

While atypical, he noted, direct commissions were common during World War II to fill in gaps.

“We want to have flexibility so that we don’t limit patriotic service to 18-year-olds,” he said. “We want to give the entire country an opportunity to serve.”